Back to Basics - A Perspective on UW Miracles

This past weekend, SCG Syracuse came and went, and with it, we saw a Legacy landscape that we were very much not used to: 2 Color decks littered the top tables, with only a single 3 color deck within the top 8! This is a vast departure from the normally greedy 3 or 4 color manabases that we have grown accustomed to in Legacy since Deathrite Shaman's printing in 2012.

While Rich Cali masterfully took down the tournament with UR Delver, this only tells a small part of an incredibly diverse metagame. This is the Day 2 metagame breakdown:

This is 29 unique decks! I could write an entire article about the metagame from this event, but we're going to talk about Miracles today. Specifically, we're going to hone in on a strategy shared by the top-performing Miracles lists: UW Land Destruction.

You might be saying to yourself…this isn't anything new? In fact, it's a very proven recipe. UW Miracles won GP Richmond with the following configuration, in the hands of Andrew Cuneo: 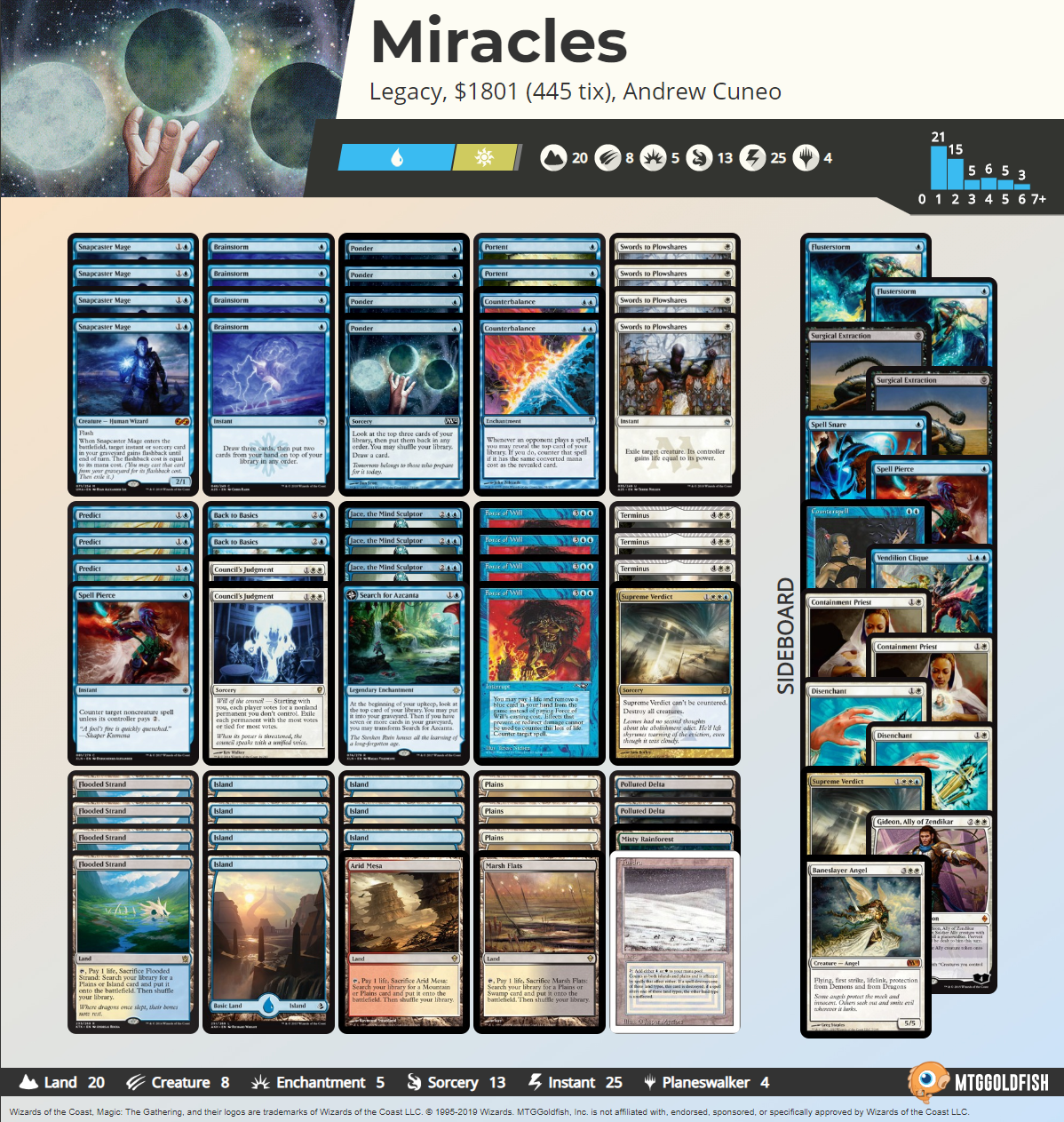 This list bears a shocking resemblance to the top 8 list from SCG Richmond, in the hands of Aiden Brier: 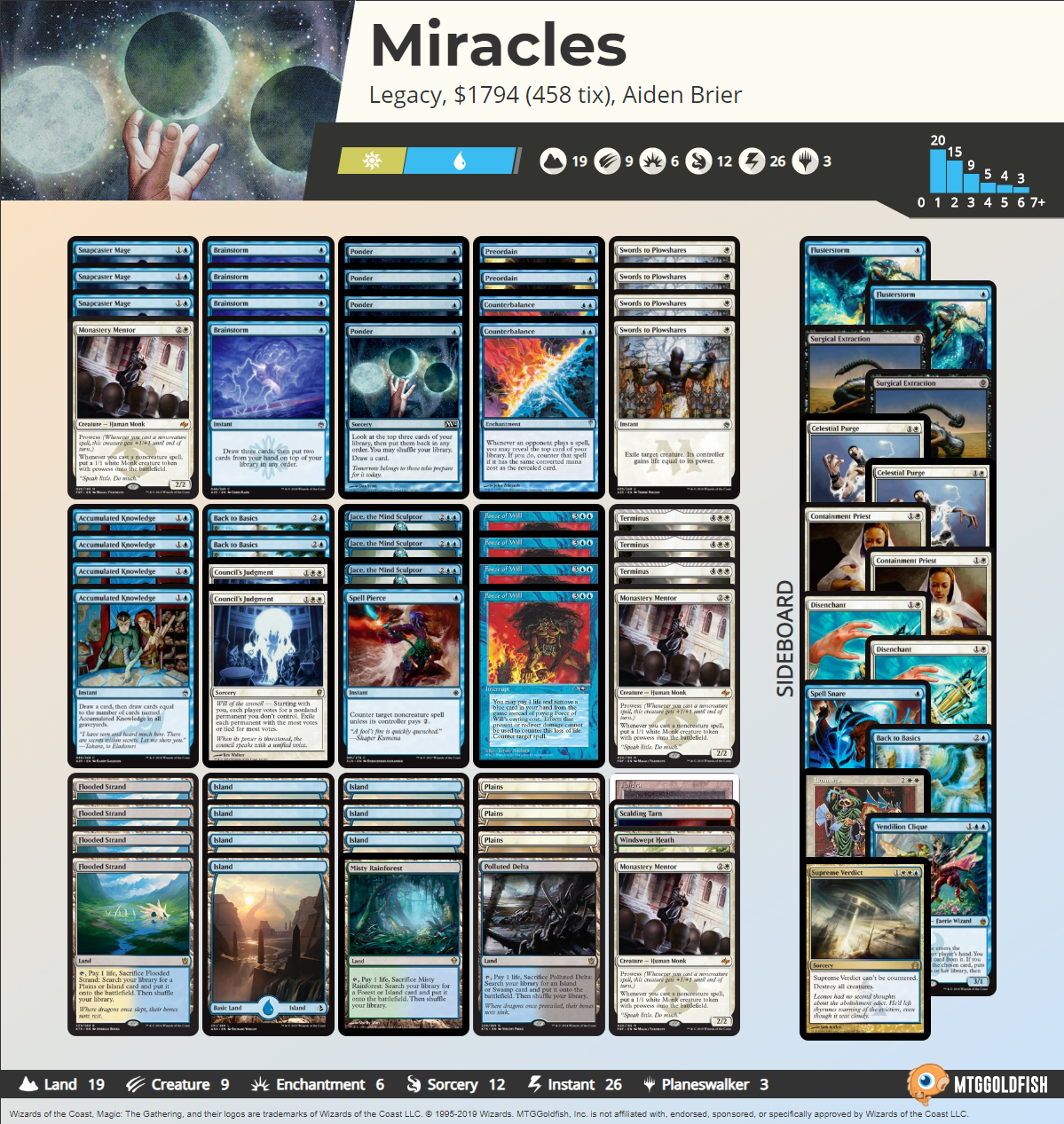 You'll notice a fairly common trend here, and that's the inclusion of the card Back to Basics. As a deck builder, one of my main gauges of power level for a deck is for that deck to consistently be able to “do a thing” well, and for Miracles, that thing is the following sequence: survive, play a problematic permanent, turn the corner, and take over the game. Over the years, the permanent of choice has varied between Counterbalance, Jace, the Mind Sculptor, Blood Moon, Entreat the Angels, Monastery Mentor, and as of late, Back to Basics.

All of these lists are playing some number of Back to Basics, and the majority of them also eschew a third color to maximize Back to Basics' ability to be as one-sided as possible. Legacy, as a whole, has been about attacking mana, and you can see that in the above metagame as well as the ranking of the Top 8: Lots of basic lands, with 2-color Delver configurations surpassing the 3-color configurations for the first time in years.

Mono-Red Prison, in 7th place, is a deck that wins by playing a plethora of cards disrupt their opponent's development. When facing down Trinisphere, Chalice of the Void, or Blood Moon, the opponent is often no longer able to play Magic.

You'll notice that Grixis Control, when compared to its relative dominance the past several months, is underrepresented. There is one copy in the Top 8, but the next-best finishing list is in 61st.

Related to the decline of Grixis Control, Stoneblade decks are beginning to make a bit of a resurgence, mostly as pure UW decks. I believe that this is due to the level of mana disruption being leveraged in Legacy today, and Back to Basics is a large part of that. Being cold to any amount of mana disruption can be backbreaking, and there are current so many played effects in Legacy that disrupt mana, that playing extra colors to gain access to slightly more powerful cards is not currently worth it.

I've been trying a lot of UW Delver lately, my progress with which you can follow on this blog. I've been learning a lot from the deck and really like its metagame positioning. I'm now at the point where I think I can extrapolate what I've learned playing that deck, reconcile them with the results from this past weekend, and make a few conclusions about the way Miracles should be built in today's Legacy metagame.

Firstly, a 2 color manabase is just so insulated against how much of Legacy tries to disrupt you, and that was one of the biggest draws to playing UW Delver with a stack of basic lands, and Miracles's manabase within 2 colors is the best it really can be in Legacy outside of something more polarizing, like Burn.

Secondly, being proactive is extremely important. UW Delver could play both proactively and reactively, but my favorite part of playing the deck is how it could invalidate much of your opponent's hand by playing something difficult to interact with, like a True-Name Nemesis wielding a Umezawa's Jitte. Miracles does this a bit differently, with leveraging powerful permanents, such as the aforementioned Back to Basics, or Jace, the Mind Sculptor. This issue with the proactivity within Miracles is that it's often somewhat narrow. Back to Basics isn't stellar against most combo decks, and Counterbalance is mopey against all of the Chalice decks. The real power of the deck lies in how these two cards cover each others' weaknesses. There are not many decks in Legacy that are not covered well by one or the other, and if there is, Mentor and Jace will often provide a enough of a gameplan to not leave you completely lost in a matchup.

Thirdly, the mirror match does not matter that much. This is often a contentious point, especially for me, as I've almost always played red in my Miracles lists, but I think the cost of Red, no matter how minimal it might seem, is far too high now. If you fully analyze the above lists, the only place where I find myself really wanting Red is the mirror match. Most of the other archetypes in Legacy can be handled by any number of other threatening effects in Legacy, but opposing Jace mirrors are really where you want to have Pyroblast effects, and the biggest one right now is actually the mirror match. Choosing to have an edge in the mirror match against the mana stability of 2 colors and leveraging the full power of the sledgehammer named Back to Basics is a decision that must be fully weighed when building your Miracles deck today. I find myself wanting as much metagame coverage as possible, and this leads to playing only two colors.

When we break it down like this, I consider the following as the core slots when it comes to Miracles in the main deck: 4 Ponder/Brainstorm/Force of Will/Swords to Plowshares

From here, the most difficult decision often comes down to how you want to fully equip your card advantage engine. Most of the above lists choose to go down the route of:

But I think there's a very strong argument for Sam Roukas's approach, which is more akin to Cuneo's original approach:

The decision between the two is something that I'm in the process of working on figuring out myself, but I am leaning towards Sam's approach because I inherently prefer as many 1 CMC cantrips as possible in my Miracles deck, due to how Miracles operates in conjoining countermagic and removal spells, and pre-top ban Miracles played 12 cantrips for the most part as well (4 Ponder, 4 Brainstorm, 4 Sensei's Divining Top).

This essentially creates the core of the Miracles deck, but dropping a color does not come without a cost. As I mentioned before, the mirror becomes a bit more difficult to manage without the (training wheels, some may say) 1 mana vindicate ability of Pyroblast effects, and Jace mirrors in general get a bit weaker. Play-skill within a midrange Blue mirror will always be the biggest deciding factor, but I have relied on Pyroblast effects for many years to garner out that edge, so it will be difficult for me to adjust as I begin to practice Miracles once again. I have a few ideas of how to possibly address this newfound Jace weakness:

A stack of Spell Pierces and Council's Judgments.

A pile of Monastery Mentors supported by Daze or Cavern of Souls.

A few Vendilion Cliques and a Karakas/Cavern of Souls.

As you can see, these ideas range from wholly unrealistic to somewhat marginal in their gains, with perhaps the last option being the most realistic while also having other metagame coverage.

This will probably be the list I start my testing with, Sam's list with a few very small changes: 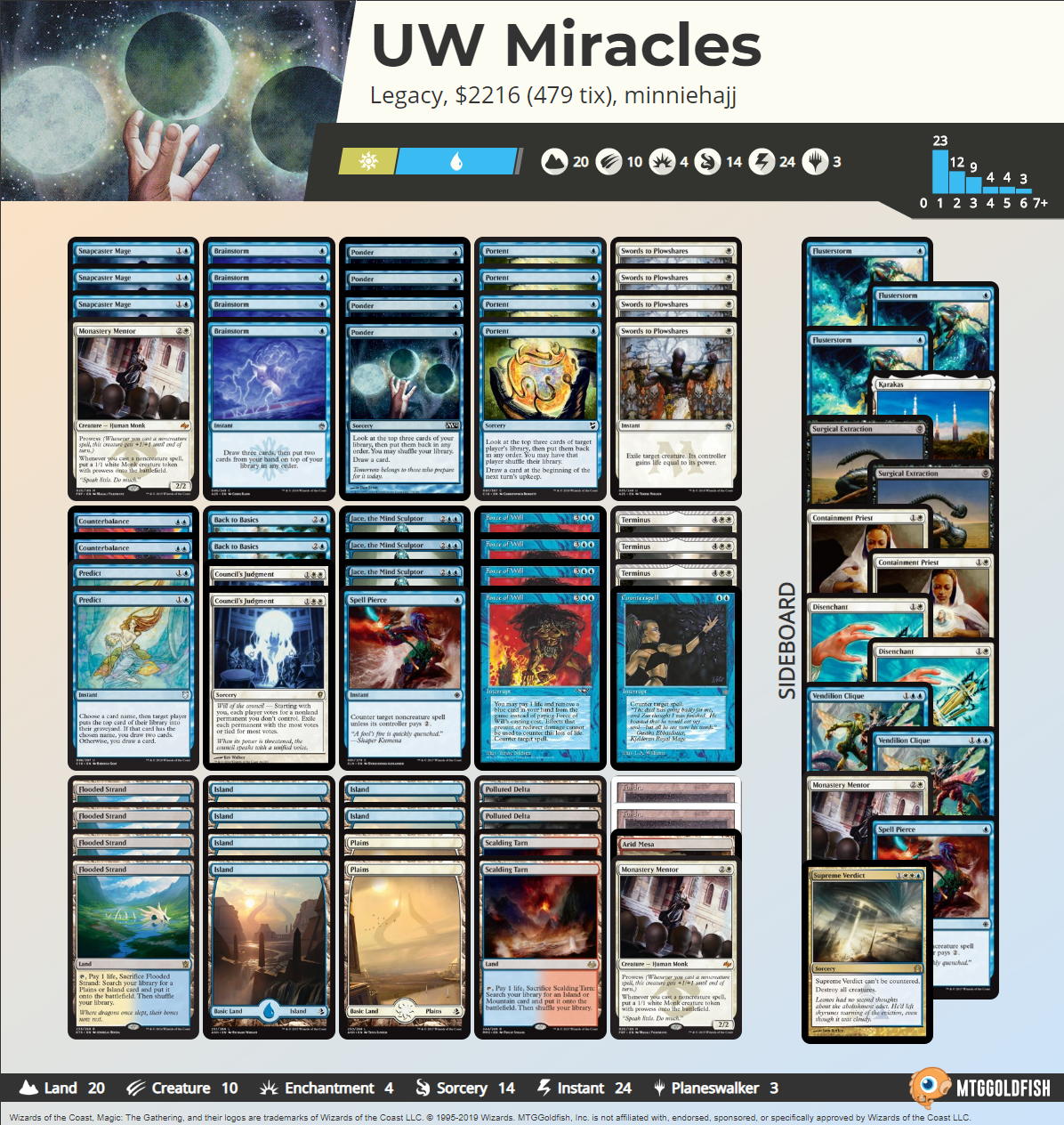 I am also in the middle of testing versions of the following list, inspired heavily by my good friend Wilson Hunter, though I think it needs to have main deck Back to Basics at the very least. 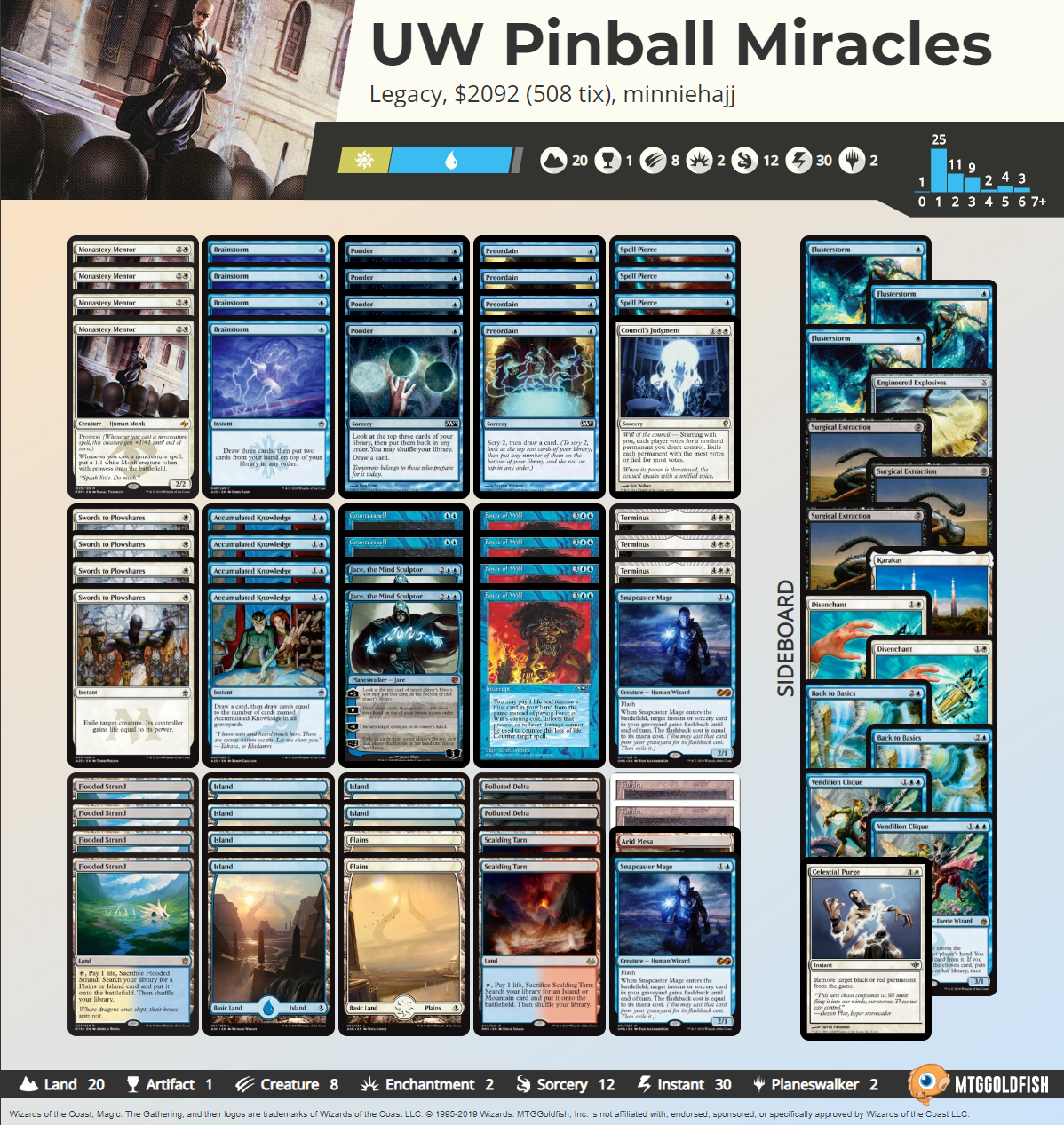 One last thing I wanted to mention was that I am intentionally eschewing some of the more experimental cards like Palace Jailer and Mission Briefing that I've tested in the past, because I think the deckbuilding constraints that these cards can potentially create draw a fine line between “innovation” and “cute.” I want to focus primarily on working with cards that I know to be good at any point in a game, and Miracles is polarizing enough as it is. I am all for testing these types of cards, but they will definitely not be my focus going forward.

Mission Briefing specifically is very difficult to fit in a UW list because, since you lose red, Snapcaster Mage's body to pressure opposing Jaces is something I consider of utmost important, as well as protecting against opposing Snapcasters since, again, you don't have red. Since Briefing competes with that slot, I am not thoroughly testing Mission Briefing in UW only.

EDIT: Josh Shields also pointed out that Mission Briefing's color requirements are difficult as well, and in UW, your fetch patterns will often require you to get UWU or UUW or UUWW as fast as possible. Briefing adds additional stress to your manabase, and your manabase is intended to be built to be as nondisruptable as possible. Thus, playing Snapcaster Mage over it is another plus in that sense since Snapcaster can be cast from basic plains, and Mission Briefing cannot.

Dylan Petter (@Prepare4robots) made an awesome quantitative breakdown of ALL of the Miracles lists from SCG Syracuse, and his analysis supports a lot of my conclusions here. Find his awesome breakdown here

I am extremely excited to start working on Miracles again as we march closer to GP Niagara Falls and SCG Cincinatti. If any readers have any ideas on how to solve the “Jace” mirror problem without having to splash Red, please let me know! Thanks for reading!