For the past month, I've been shouting from the rooftops about the power of Karn, the Great Creator, and how much this peaceful golem propelled Bomberman into what I believe is the best deck in the format.

If you need a little bit of catching up on all the things Karn, the Great Creator can do in Legacy, or how Bomberman works, click this link to my article a few weeks ago, titled "Total Karnage."

Here is my current decklist for White Bomberman:

Now that we're all up to speed, I wanted to get a little more in depth about Bomberman, including why I believe the deck is so good.

The Many Ways to Bomberman

Bomberman's power comes from its flexibility. It can reliably win in one of 5 ways:

1: Auriok Salvagers + Lion's Eye Diamond to generate an arbitrarily large amount of mana, to then return and cast a lethal Walking Ballista. If a Walking Ballista is not available, you can draw 15-30 cards by repeatedly recurring a Mishra's Bauble or Urza's Bauble, learning a lot about the top of your opponent's deck or their hand in the process. The card draw should make it trivial to win on your next turn.

2: Monastery Mentor + noncreature spells. Mishra's Bauble or Urza's Bauble are great "slow-trips" to trigger and grow the Mentor, creating an army in no time. An unanswered Monastery Mentor can easily become too much for many decks in Legacy to answer, and this deck can reliably cast the Mentor on Turn 2, sometimes even Turn 1. On this note, it is sometimes better to wait a turn on the Mentor if doing so enables you to cast your 0-cost artifacts after the Mentor is in play. 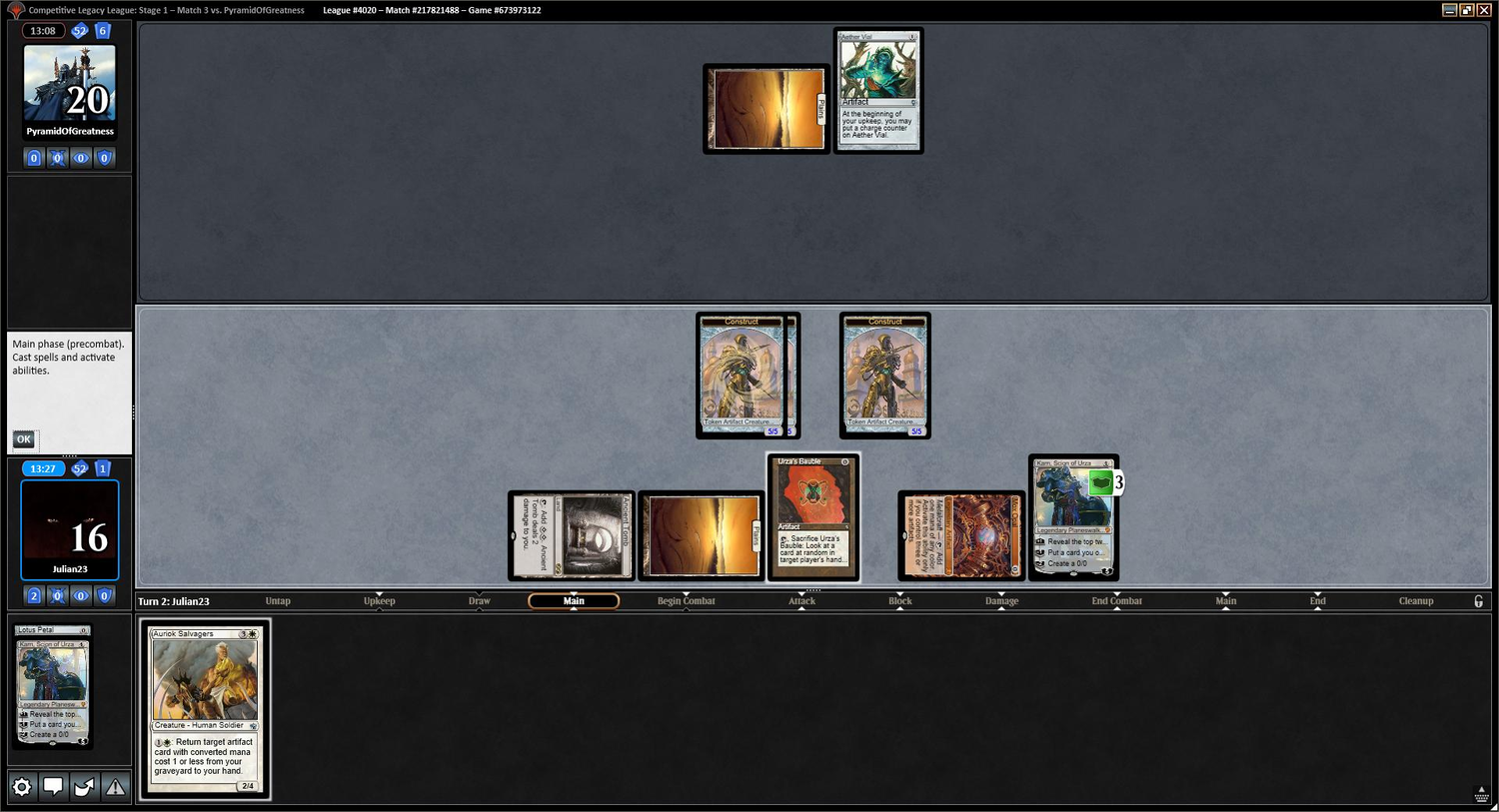 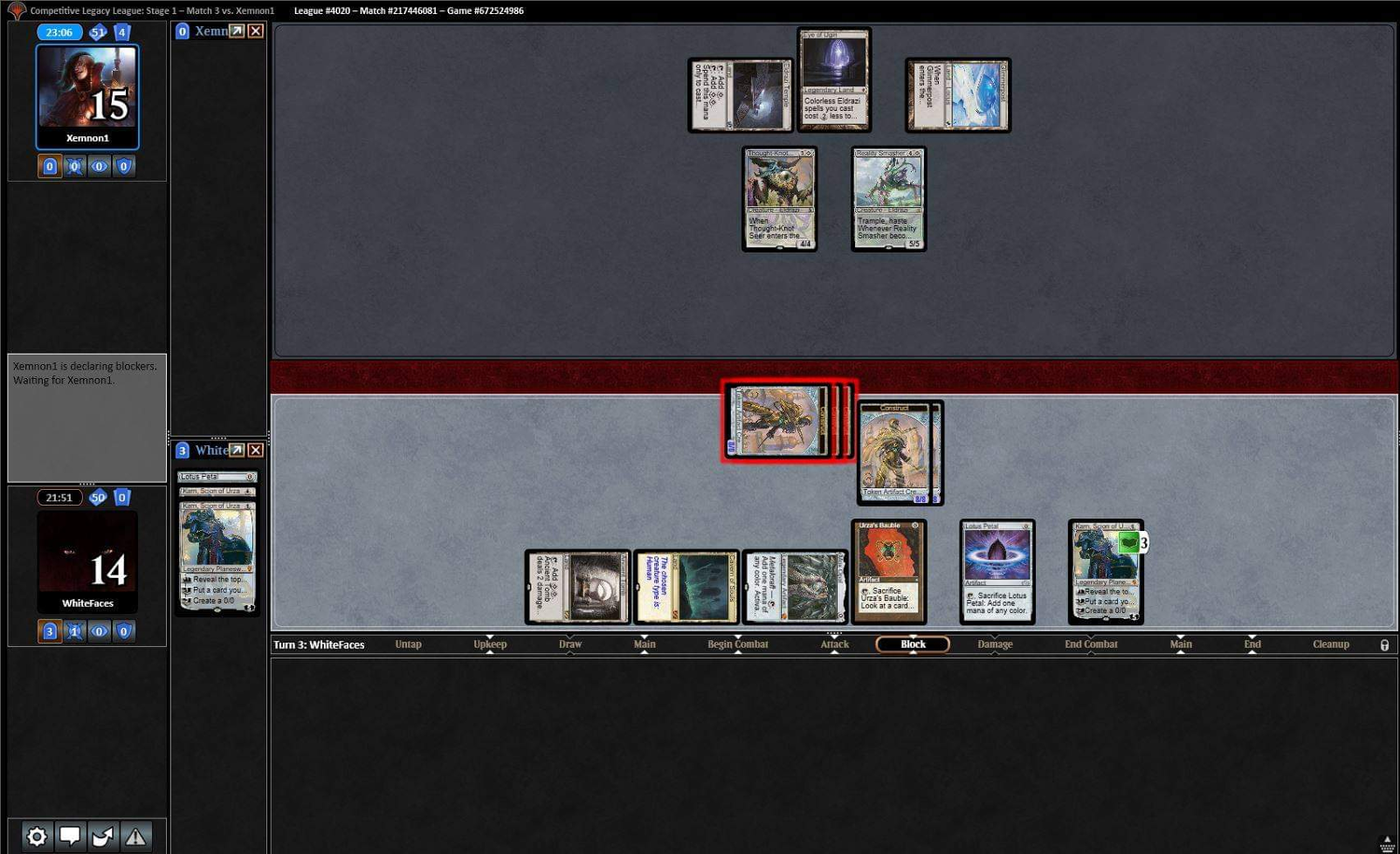 Bomberman, unlike most other Chalice of the Void decks, is really hard to play optimally. While many people relish in the knowledge that their deck is tough to pilot, I want to unequivocally state: a deck being hard to play is not upside. You do not get extra points for playing a hard deck.

With that out of the way, we can also address the opposite side of the coin: there is significant upside in playing a deck that is hard to play against.

Bomberman checks both of these boxes, and is also high enough in raw power that you can still misplay your way to wins (unlike, say, Doomsday).

To facilitate the learning process, here are a bunch of little tips and tricks with Bomberman:

Generally speaking, the cards that beat you are Back to Basics and Counterbalance. Their Monastery Mentors are better than yours. The way to win this matchup is to take advantage of the early game, exploiting the fact that 14-17 of their cards say some form of "Draw a Card" instad of affecting the board. If you watch MinMax Battle #1, Min plays Turn 2 Counterbalance into Turn 3 Back to Basics, and I still win convincingly.

My sideboarding plan against them is to cut a little bit of the fast mana, as your threats will be less likely to stick around postboard, so committing too heavily into one thing can be a liability. I bring in Disenchant and Cast Out to answer their problematic permanents.

Karn, the Great Creator's Passive ability is insane in this matchup, due to its ability to shut off equipment. Although I mentioned this in the "Tips & Tricks" earlier, it's worth repeating: turning a Batterskull into a 5/5 creature makes it fall off of the Germ.

Unlike against Miracles, you can commit heavily to the board with relative impunity, since you don't have to play around Terminus.

Commit must-answer threats early and often, and try to overwhelm them. Try to create a situation where they are too behind on board take a turn off to cast a Back to Basics.

This matchup can be fairly swingy. Hymn to Tourach can be devastating against us. Diabolic Edict can make it risky to Salvagers with no other creatures, into open mana. However, a resolved Karn (either one) is very hard for them to beat.

There's a difficult balancing act of waiting on cracking Baubles to play around hand disruption, or cracking one on your turn to play around an incoming Narset, Parter of Veils.

You will gain a lot by practicing this matchup to learn the play patterns.

While there is a huge variety in Delver decks, they play similarly against Bomberman. Mana denial + a fast clock + disruption can be hard to beat. Ancient Tomb is rough when there's a Delver clocking you.

Your plan should be to eliminate the clock on you. Aggressively using Walking Ballista to shoot down Delvers, often even setting a Cavern of Souls to "Construct" to make sure it resolves. You're much better at gumming up the ground.

Karn, the Great Creator getting Ensnaring Bridge is often game-winning in Game 1, and can still be a solid play postboard.

Karns are still hard to resolve, but since Karn, the Great Creator presents free wins, I like keeping those. Karn, Scion of Urza doesn't do enough in this matchup for how hard it is to resolve, so those come out.

I like bringing in Swords to Plowshares, even with Chalice of the Void in the deck. They usually don't let the Chalice stick around, and if it does, you're usually winning. If presented with a hand that has both cards in it, you have the agency to cast the removal spell first. It can sometimes be awkward, but I think it is necessary to have both in the matchup.

In: 3 Swords to Plowshares

Their Chalice of the Void on 0 is great against you, while yours are not great against them. This is a problem. The good news is that Game 1 on the play, you are free to cast your 0-drops, and on the draw, they will likely cast a blind Chalice on 1 if they're able.

Karn, the Great Creator is incredible in the matchup. It kills their Chalices, shuts off their artifact mana, and presents a very fast way to win. Generally speaking, if you're able to combo with Auriok Salvagers, do it ASAP and they won't have much recourse.

Be aware that their Karn, the Great Creator turns off your artifact mana, including your Ancient Den. Fortunately, Karn is a Planeswalker, and we have creatures. Attack it down!

Out: 4 Chalice of the Void

In: 2 Disenchant, 1 Cast Out, 1 Swords to Plowshares

Against Eldrazi Aggro, trim a Mox Opal and an Urza's Bauble for the full 3 Swords to Plowshares.

This matchup generally comes down to how fast they can combo you. If they have everything they need for a Turn 2 Show and Tell, they usually win. Obviously, there are exceptions, like if they bring in Emrakul, the Aeons Torn and you show them a Karakas, or put in Auriok Salvagers and you just untap and combo them. Omniscience from them usually does it, though.

There are lines where you can generate a ton of monks with Monastery Mentor, stay at above 15 life, and be insulated from an Emrakul hit.

If the game goes a couple of turns, your combos, as well as Chalice of the Void are enough to win. Chalice on 1 is obviously great, but Chalice on 3 can also be very worthwhile.

Postboard, Containment Priest and Cast Out obviously interact favorably with their combo, and Karn, Scion of Urza is generally too slow.

Since Karn, the Great Creator is usually tutoring for a combo piece or Ensnaring Bridge, it might be worth bringing in the "weakest" wish target, Sorcerous Spyglass. I'm unsure on this, and would probably cut a Bauble or a Plains to do it.

Save Baubles for their turn in order to protect yourself from discard. Mishra's on their upkeep, Urza's on their end step.

Karn, the Great Creator shuts off all of their artifact mana, and tutoring for Tormod's Crypt is great vs ANT.

Chalice of the Void is sometimes better set to 2 than 1, since it prevents Hurkyl's Recall, Echoing Truth, and Infernal Tutor / Burning Wish, as well as still hitting Cabal Ritual out of ANT.

If you're going to commit to a Mycosynth Lattice, look out for Hurkyl's Recall, Echoing Truth, or a preemptive Burning Wish for Pulverize out of TES.

You want to bring in Walking Ballista to increase your likelihood of a fast lethal Auriok Salvagers combo.

This matchup is obviously very fast, so, again, Karn, Scion of Urza and Monastery Mentor are too slow.

Graveyard hate comes in, as does Walking Ballista, to speed up the combo slightly. Keep hands that can interact in a meaningful way on Turn 1.

This matchup can be tricky. They have a lot of answers for what we can present, and we have a lot must-answer threats.

The biggest liability is a Chalice of the Void on 1 being reset to 0 by a Flickerwisp. Try not to let this happen.

Here's a cool trick that I've heard about but haven't had the chance to use:

If you have a Karn, the Great Creator and Walking Ballista in play but are afraid you will lose your Karn, either to a Flickerwisp or by damage, you can animate an opposing Aether Vial and then shoot it with the Ballista.

Also, remember, you can +1 Karn, the Great Creator on an equipment and it will fall off of the creature it's equipping. The static ability of Karn will prevent it from being re-equipped as long as Karn lives.

They have a lot of hate. Thalia, Guardian of Thraben, Sanctum Prelate, Phyrexian Revoker, and Flickerwisp are all very difficult to deal with. The longer the game goes, the less likely you are to win.

In: 3 Swords to Plowshares, 2 Disenchant, 1 Cast Out

This is another matchup where it is okay to have both Swords to Plowshares and Chalice of the Void, especially since Chalice on 2 is often the best number to set. They will bring in Sphere of Resistance and Krosan Grip, so plan accordingly if you try to move all in with something postboard into open mana.

Monastery Mentor loses to both Punishing Fire and Tabernacle, so I like cutting them.

Try to keep your Karns above 2 loyalty so that they don't die to a single Punishing Fire.

In: 2 Swords to Plowshares, 2 Disenchant, 1 Tormod's Crypt, 1 Cast Out

The Monowhite build of Bomberman has performed phenominally, but I can't (read: won't) stop tinkering. I'm currently exploring UW builds, utilizing Teferi, Time Raveler as a way to be able to combo off without fear, as well as bounce annoying permanents like opposing Chalice of the Void.

I recorded a league, replacing the 3 Karn, Scion of Urza with 2 Teferi, Time Raveler, and a 5th Monastery Mentor, by which I mean Sai, Master Thopterist. Watch it here!

I hope this primer was valuable to you. Let me know in the comments (Reddit, Twitter, or here) if you have any questions or comments.

← MinMax Battle IILeveling up in Magic: Practice Smarter, Not Harder →