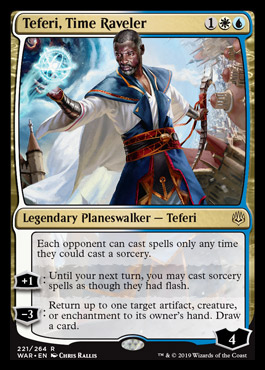 Wow. Teferi, Time Raveler is easily one of the coolest cards in Magic's upcoming War of the Spark expansion. When I first saw the card, I read it quite a few times. Each time I read it, my expression changed; sometimes a wide smile, sometimes a frown, sometimes a look of sheer confusion. At the risk of sounding cliché, there's a lot to unpack here, so let's start!

The first thing to note is that he only costs 1WU. Legacy revolves around cheap, efficient spells, and a 3 mana planeswalker definitely checks that box.

Each opponent can cast spells only any time they could cast a sorcery.

With War of the Spark, Wizards is creating a set designed specifically around Planeswalkers, and, in doing so, exploring some new design spaces. In this case, a large amount of Planeswalkers will have static abilities, Teferi included, and this one is significiant. The implications of a card like this are massive; it is effectively a one-sided Defense Grid. A fair amount of Legacy decks (mostly combo decks) utilize Defense Grid, and their usage of the card is often one-sided regardless, but a truly one-sided version of the card makes every single spell you cast as the controller of Teferi uncounterable, and that's a massive deal. This ability on its own is enough to warrant it pulling its weight in the format.

+1: Until your next turn, you may cast sorcery spells as though they had flash

This ability is unique at such a cheap mana cost, and it works exceptionally well with Teferi's static ability. A plethora of options opens up with this:

Due to the static ability, none of this can be responded to. No more counter battles over the Terminus, no more Brainstorms in response to Thoughtseize or Hymn to Tourach. A combined effect like this is something that has hitherto been unseen in Legacy.

-3: Return up to one target artifact, creature, or enchantment to its owner's hand. Draw a card

Likely the most underrated ability on this card, it's still exceptionally powerful because it contains the text that most Blue mages drool over: Draw a card.

This ability likens it to similar cards such as Council's Judgment, Engineered Explosives, et al. in how it interacts with problematic permanents. To note, it does not hit True-Name Nemesis, nor opposing Planeswalkers, which are definite weaknesses, but the fact that this ability draws a card and its existing flexibility may be worth the loss of additional coverage compared to other options.

One of the simplest things to forget about is that Teferi's Loyalty starts at 4. That means it can't be profitably bolted in order to get traded with, and that's one of the biggest draws to the play-ability of this card.

So what does this all mean? It means a powerful walker with a slew of relevant abilities that are accented very heavily in Legacy. Its static ability alone allows you to play along an axis that the majority of blue mirrors are not equipped to fight against.

One of the subtlest things this card accomplishes is how it contorts and dictates mana usage. It's hard to understand at first, but because it's static ability prevents instant speed interaction of all sorts, not just countermagic. For example, if it resolves against a flipped Insectile Aberration, you can use the -3 ability on it, and they can't actually bolt it down on your end of turn. They have to untap and do so on your main phase, and it already drew you a card! I know this seems like a very small exchange, but the mana usage here is something a deck like Delver is not actually well equipped to do on a turn by turn basis, and that is exactly what Teferi does.

Suddenly you have a 3 mana walker that can't be interacted with at all at instant speed. No end of turn Abrupt Decays, Punishing Fires, or Assassin's Trophy. no Crop Rotation or Flusterstorm battles over removal. Dictating how your opponent has to spend their mana on their own main phase is something that we have not truly had access to in Legacy up until now, and it's incredibly difficult to evaluate since a lot of established play patterns rely on using mana whenever those specific decks can do so advantageously.

So what implications could Teferi, Time Raveler have on Legacy? It might cause the UW Stoneblade and Miracles decks to shift back to a Red splash, in order to Pyroblast this card on the stack. Moreover, the threat of this card will influence how players sequence spells and use their mana.

Below is the decklist I'll likely start my testing with: 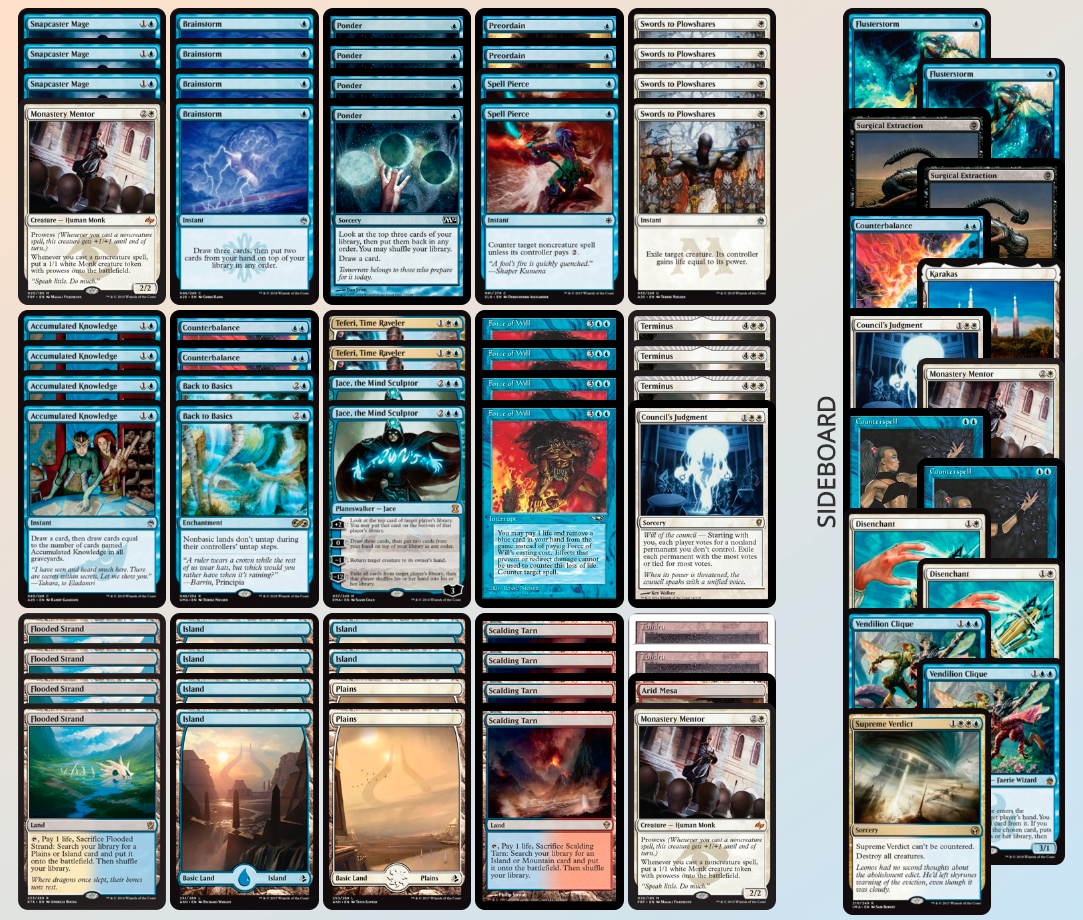 Nothing fancy here. I cut the second Council's Judgment and the 3rd Jace, the Mind Sculptor. New Teferi kind of serves a similar role to CJ in how it deals with resolved permanents, though much narrower. I chose these slots also as I'd like to experiment what it would look like without access to the second/third types of those effects in my deck anyway. 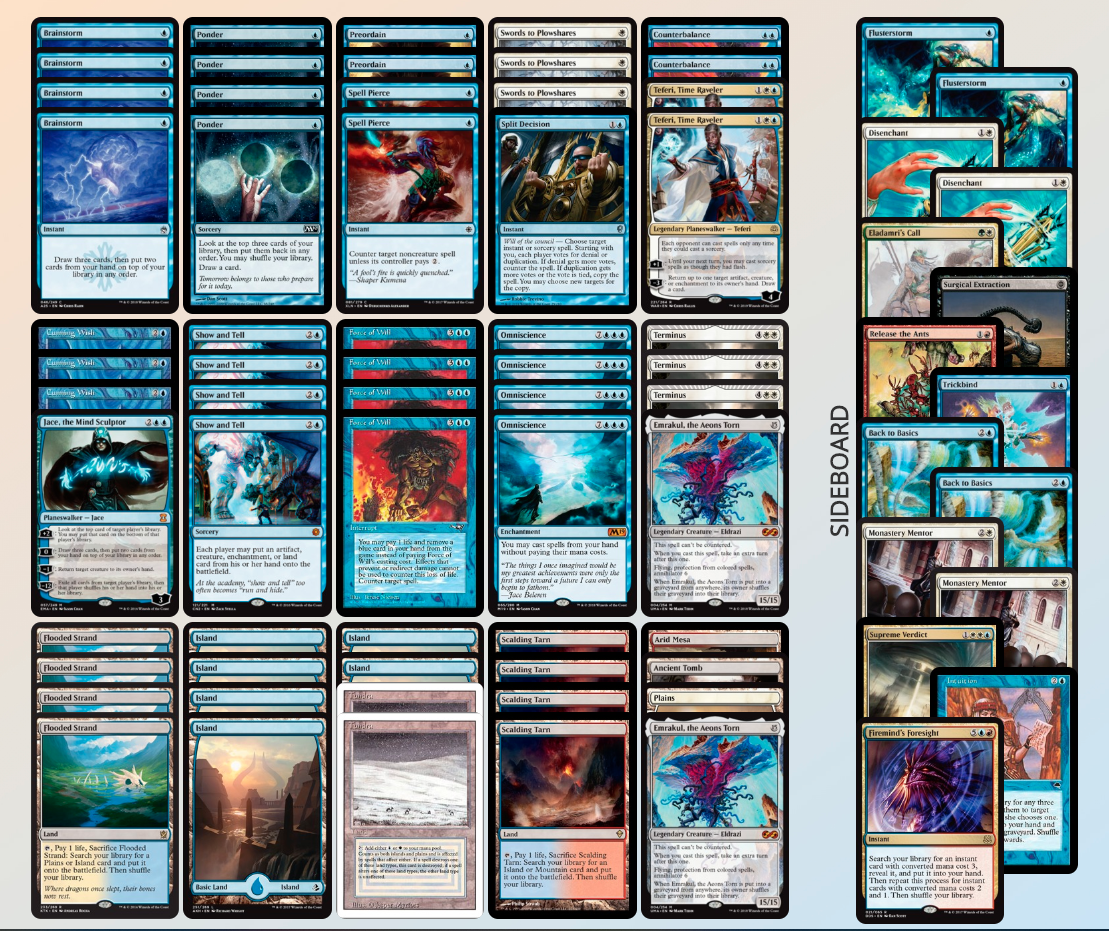 For everyone who was hoping my Top 8 Tournament report was actually about UW Show and Tell, here you go!

Please note, this decklist is pure speculation. There have existed hybridizations between Miracles and Show and Tell decks in the past. Greg Mitchell created an OmniTell/Miracles hybrid deck back in the Sensei's Divining Top days, but Top's banning meant that you were too likely to draw the wrong half of your deck, and so the archetype fell away. The new Teferi could help the archetype in a conceptual sense. It helps the Miracles plan, with instant-speed spells, while simultaneously giving you uncounterable, and instant-speed Show and Tell! I doubt this specific decklist can perform, but proofs-of-concept are how most decks start. I'm sure some Legacy Combo masters can figure out if this archetype truly has legs.

I am very excited to test out decklists featuring this new card in Miracles going forward, in preparation for GP Atlanta this September!

If you have any suggestions on decklists featuring this new and exciting card from the upcoming War of the Spark expasion, please send them our way via commenting, messaging, or tweeting at us! Thanks for reading!

← The (Steely) Boys are Back in TownEldrazi Post - Legacy League →