Jack of All Trades, Master of None - A UW Delver Case Study

UW Delver is a deck that's difficult to evaluate by simply glancing at it on paper. Many people claim that the deck is “at war with itself,” noting the elements of the deck that don't seem to play well with other cards in the deck. “Delver of Secrets vs. Swords to Plowshares” and “Daze vs. Jace, the Mind Sculptor” are the two primary focal points of this criticism.

First, let's look at a few builds of UW Delver. There's actually quite a widespread set of variations to the deck, some adhering more to the Delver of Secrets/Daze/Wasteland package by playing more low-to-the-ground threats and countermagic, like the list below. 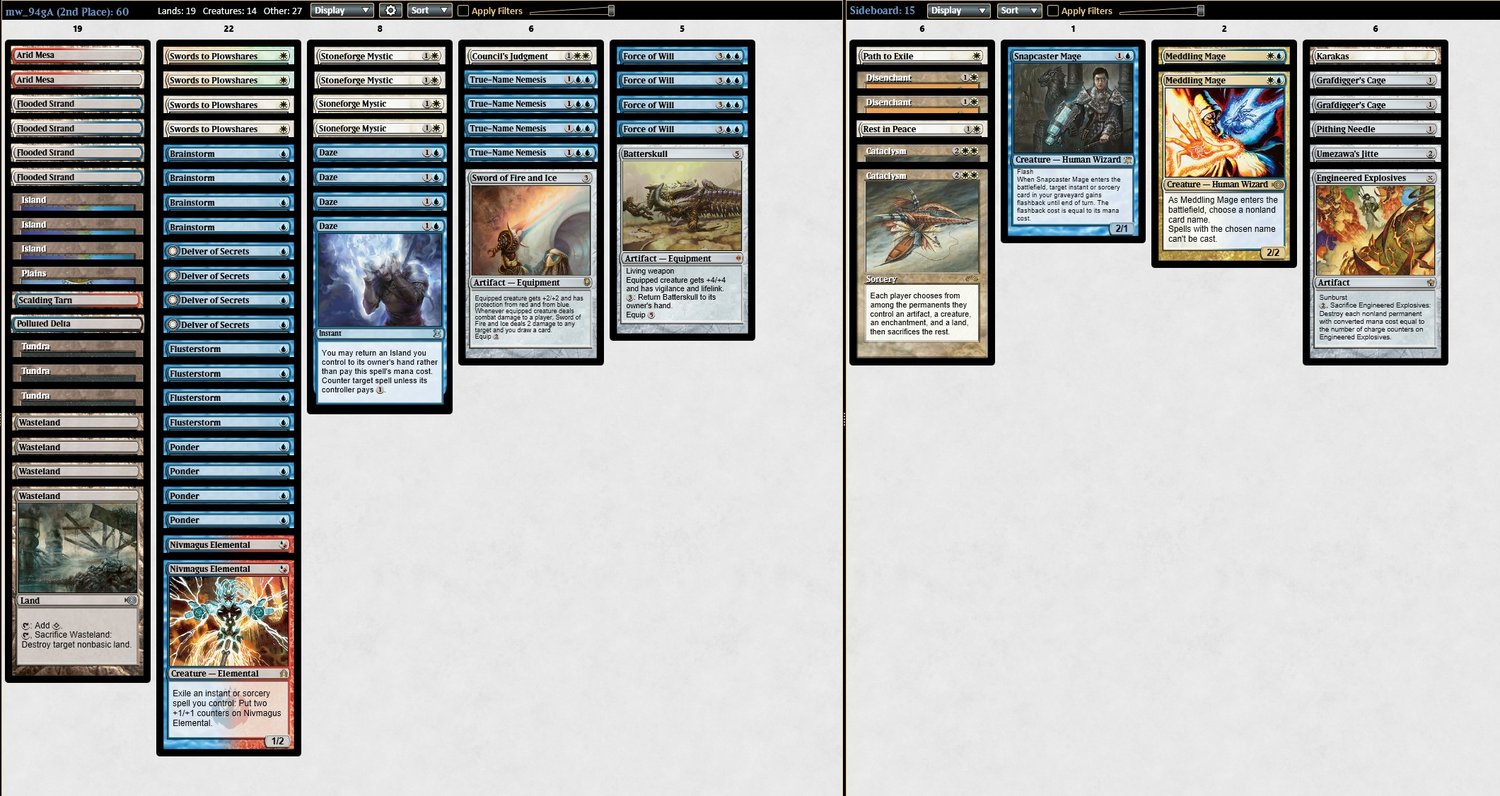 There is quite a bit to unpack here, even simply looking at 2 somewhat similar looking lists, but one of the first questions I asked myself when looking at a deck like this at all is, “Why?”

Before diving further in, we need to quantify a little bit what it means to be a 'good deck.' The concept and term for a deck to perform well is qualified differently depending on who you ask or what metagame or context you ask of, but I think the answer should always be fundamentally tied to “a deck that you win with the most,” if we are to remain as objective as possible. So, looking at a deck like UW delver, it doesn't really seem to do anything that it's trying to do exceptionally well. One of my personal biggest rules for deckbuilding has always been “never be a strictly worse version of a different deck.”

Based on my previous evaluation, why in the world would I ever pick up UW Delver? It was hard for me to fully understand why, at first. However, actually playing the deck quickly revealed to me the value of a factor I previously completely ignored: the value of being a jack of all trades, master of none.

Where UW Delver truly excels is the fact that it can morph itself into whatever you need to be, while retaining flexible elements that allow it to swap roles as you need. Need to be a fast clock vs combo? Slam a turn 1 Delver and hold up disruption. Need to grind against fair creature decks? Play removal spells and suit up a creature with a Jitte. Need to play the long game? Slam a Jace, the Mind Sculptor, Gideon, Ally of Zendikar, Palace Jailer, or a multitude of other threats.

UW Delver retains the tools to be 50%+ against most of Legacy, which is something that a lot of the decks that it contains elements of can't really boast in the context of what Legacy looks like today.

If we take a look at the top Legacy decks according to MTG Goldfish, we can do an analysis of UW Delver vs the field compared to its allegory decks vs the field. Please note that the following matchup dynamics are a qualitative, opinion based analysis.

EDIT: I want to make it clear here that the chart is used to compare how UW Delver performs against the other decks in this chart, and is not necessarily indicative of a matchup being favored for the deck itself. For example, I believe Miracles is heavily unfavored vs Eldrazi Post, but UW Delver is more favored compared to Miracles against that matchup, and so on.

I know a matchup breakdown chart like this is usually divisive in article format, but I think it does an excellent job of highlighting why I believe UW delver to be a very strong potential contender in Legacy today. We can do a comparative analysis of a few key matchups where UW Delver is Favored that many of its kin would not have nearly as good of a chance. I will skip analyzing the Blue vs Blue mirrors as I could probably write an entire thesis on each of them (and maybe will, someday!), so I'll focus on highlighting a few matchups where UW Delver can borrow elements from the other decks in the chart in order to tilt a normally unfavored matchup to be more even.

A Chalice of the Void deck that contains a suite of lock pieces means that it inherently hurts a lot of the cantrip suite of blue decks, and Mono Red Prison is also exceptional at attacking Dual-Heavy manabases. Thus, I don't think any fair blue deck can really claim a positive matchup just due to each of these dynamics, except for UW Delver. UW Delver's ability to play basic lands to play through Blood Moon, and get around Chalice with Stoneforge Mystic/True-name Nemesis, allows it to minimize the amount of spells that matter while also clocking the opponent and ignoring much of their disruption. Against this matchup, UW delver channels its ability to emulate a UW Stoneblade deck.

I've always thought that the best possible ways of attacking Sneak and Show involved at least two of the following: A fast clock, a permanent-based piece of disruption, attacking the hand, and countermagic. A deck that can do all of these things is heavily favored against Sneak and Show, but it's difficult to achieve all of these things in a single deck due to color restrictions, as well as regular deckbuilding restrictions. Thus, Sneak and Show somewhat preys on decks that can only produce one of these interactive elements, so I think it's favored against both UW Stoneblade and Miracles since those decks can only truly muster countermagic and sometimes a permanent-based piece of disruption in order to interact. Grixis Delver can do ¾ or, in some wild cases, all 4, and thus I consider it to be a fairly robust matchup for them. UW delver can comfortably do 2/4, fast clock and countermagic, and can often also include ¾, the permanent-based piece. Thus, I'd say the matchup is even and can tilt towards being favored depending on the post board configuration.

Eldrazi is another Chalice of the void deck that preys upon how blue decks in Legacy built, and the deck is somewhat difficult to attack due to the combination of Chalice of the Void invalidating the cantrip cartel, as well as having inevitability due to Eye of Ugin. Thus, fair blue decks like UW Stoneblade and Miracles can have a rough time against this deck due to no real part of the game being a good position, and they rely on their ability to clock the Eldrazi opponent via Monastery Mentor/True-name Nemesis/Stoneforge Mystic and disruption in the form of counterspells or hate permanents like Back to Basics in order to eke out a win against them. Grixis Delver is weak against the Chalice part of the deck, but due to how much disruption it gets to play and how quickly it can generate a clock, it's a bit more even against this deck. UW Delver takes the best of all of these strategies to quickly disrupt and clock the Eldrazi opponent, since it can ignore Chalice a bit better as it does not rely on its cantrips as much once it has established a clock.

Besides specific matchups, the thing that I want to highlight the most is that UW Delver has a less polarizing matchup spread vs most Legacy archetypes at the moment, as it can choose elements from each deck that it derives gameplans from, and I think when the correct matchup spread presents itself, it might be a serious contender in specific metagames.

One more thing to note is that UW Delver also sidesteps a lot of the ways the the Legacy metagame is developing against the other allegory decks in the chart. Decks such as GB Depths are not well equipped to handle a deck that can clock quickly while also having a 1 mana removal spell against Depths; cards like Spell Pierce are actively atrocious vs this creature-heavy version of Delver, and even certain adaptations that popular strategies are making, such as Death and Taxes playing sideboard Chalice of the Void don't line up or help them with the multitude of angles of attack that UW Delver can present. Opposing planeswalkers also don't truly line up well against UW Delver since the deck has a varied creature suite to handle them. Liliana the Last Hope is the wrong Liliana for answering True-Name Nemesis.

One more thing I'd like to add is that while the above chart may indicate that UW Delver has a clear field advantage over the rest, pilot experience, comfort level, and frequency of matchups should all be large factors in deck selection for a big event. This is just a series of matchups, but it might behoove you to play something else if that is what you prefer using any of the criteria I've presented.

I'm not quite finished with testing UW Delver, as the more I play the deck, the more I continue to learn about the intricacies of how it lines up against various decks in Legacy, but I know that I'm learning quite a bit in my time away from Miracles. Each of my losses have absolutely felt like my own mistakes came into play, and I truly felt like I was in any given game of magic no matter what my opponent was doing. I had options at any step of the game, even with a Chalice of the Void or a Terminus on the stack, and I can't really say the same when playing any other blue deck at the moment.

In conclusion, I think a properly tuned UW Delver 75 has the ability to adapt to any scenario that Legacy can throw at it. Between Palace Jailer, Jace the Mind Sculptor, Cataclysm, Nivmagus Elemental, or Back to Basics, UW Delver has a slew of options that allow it to morph to whatever it needs to be, when it needs to be that thing. What might that tuned 75 look like? Only time and experience can tell!

It might just be a very good time in Legacy to be a Jack of all Trades, Master of None.