Sailing into the Sapphire Storm

My name is Marcus and I play on MTGO as “Iwouldliketorespond”. I like blue mana and my favorite format is Legacy.

In a metagame where “innovation” circles around the number of Pyroblast players should run maindeck to combat the “next wave of bannings” I wasn't very optimistic of breaking Legacy with my mono blue pet deck. High Tide is not even innovative or new to begin with. In fact it's quite the opposite dating back to at least 1999 when Kai Budde won a Grand Prix with it.

One day during my daily routine of casting Brainstorm into Hullbreacher I was approached by fellow High Tide Enthusiast Felipe Parada (LeMasters on MTGO). Felipe told me that he's been working on “Sapphire Storm”. After me complaining about handing out treasures instead of drawing cards, Felipe explained to me that the deck can win through a Hullbreacher by generating enough mana and storm for a Brain Freeze kill without even drawing any cards!

What is High Tide?

Traditionally “High Tide combo” is a mono blue combo deck that is looking to resolve the namesake card High Tide and pair it together with various untap effects to generate a bunch of mana. This mana is then used to draw more cards….cards that draw even more cards or generate even more mana. Until your opponent ends up with no library (via Blue Sun's Zenith or Brain Freeze). More often than not they scoop 'em up after you draw 40 (giggling).

The most common version is “SpiralTide” which, you guessed it, combines the card Time SPIRAL and High TIDE.

The “Sapphire Storm” version still has access to the classic and powerful High Tide - Time Spiral two-card turn 4 combo. Slow and steady. But it also has access to several deterministic turn 3 kills on the back of the many accelerants (Sapphire Medallion, Snap, Cloud of Faeries) in combination with High Tide and Spellseeker. It even has some number of turn 2 kills if you are creative or lucky enough to draw multiple High Tides!

What I really like about this version is how little we “give up” to make space for what is essentially 12 accelerators instead of 3. The added versatility from the “Sapphire Storm package” (consisting of Spellseeker/Snap/Sapphire Medallion/Cloud of Faeries) is huge and minimizes the classic combo issue of “too much mana and not enough business” by serving double duty (or more!).

Felipe explains it very well; “Almost all the cards can go forward (for the combo), go back (seekering counterspells, protection, block) or go to the sides (working as cantrips).”

Comparing the lists card for card, Sapphire Storm gives up on some protection (Flusterstorm) and moves it to the sideboard instead. Predict is “replaced” (I mean nothing really can…) by Sapphire Medallion as the 2-drop of choice. Turnabout becomes Snap (which in this version is the same mana boost, more on that later). Preordain is missed and could very well replace the Cloud of Faeries we include in this version if we want to dial down on the accelerants for more consistency.

We cut 2 Merchant Scroll and move the Intuition to the sideboard for the Spellseekers. The third Cunning Wish becomes a main deck Brain Freeze to have more combo lines available. That's pretty much it. As you can see over half of the changes are basically the same effect on a new card and the other half is trading robustness for speed. However, the “floor” of the added accelerants are pretty high and can turn into business in many ways (for instance by cycling a Cloud of Faeries or aim a Snap at a Spellseeker to go and grab a spell).

No version is “strictly” better but the differences create some interesting space to explore. Most notably in preparation for the upcoming Frantic Search unban (ONE CAN ONLY HOPE). Although I guess the Reset version (Solidarity) is the better shell for that.

Why not these cards?

Deckbuilding also has some additional limitations. The type of anti-permanent hate the deck can run is reduced. One of the best cards printed in the last 10 years, Dress Down, is not ideal in this deck. Another example of a great sideboard card that becomes worse (but is still very much playable) is Teferi's Realm.

This is a common baseline but often not enough on its own. It's still 42 cards milled with a total of 3 mana to spare somewhere along the line.

One copy of Merchant Scroll is included in this baseline just to add additional storm and is removed in the other examples below.

It's worth keeping in mind that if you and your opponent both exchange Force of Wills that's another 6 cards getting milled at the end of the chain. For every cantrip cast another 3 cards and so on.

An alternative to this baseline with almost identical outcome is to replace the Sapphire Medallion in play with a second copy of High Tide in hand. In order for this to work you'll need a 4th Island in play or an untap effect in hand (Snap with a target or Cloud of Faeries) to ensure that the second copy of High Tide is cast before you cast Spellseeker, otherwise the math won't check out when you untap your Islands..

If you are certain that the graveyard is uncontested you can take a detour with Mission Briefing to add some additional storm with the floating mana and cast Snap for the fifth time.

If we are scared of removal on our Spellseeker or if milling 51 cards is not enough (I.E you are up against the mighty Emrakul, the Aeons Torn who Shuffles or some Dnt player who, instead of shaving 60 added 2, with access to 2 more mana we can go;

Time Spiral is an extremely powerful card and if we choose to go for it there are often tutors to spare for additional copies of High Tide or protection.

Felipe was kind enough to provide a Sideboard mapping for some of the common decks.

Vs Death and Taxes

Looking towards the Future of the Deck

Streets of New Capenna has some additional tools: 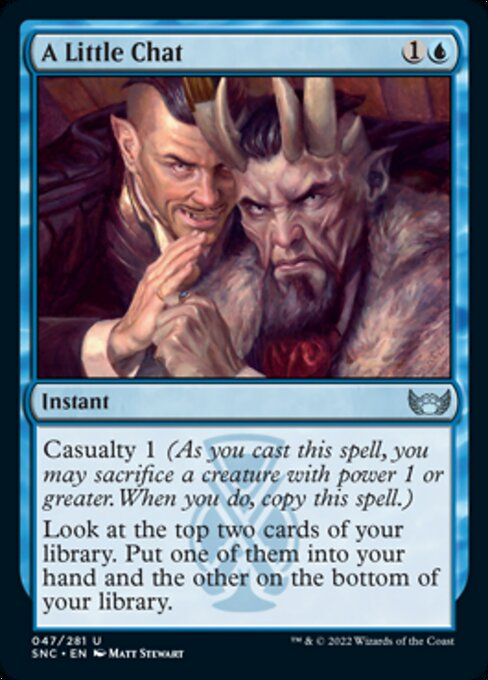 Potentially replacing Ponder, A Little Chat card has a high upside of potentially “drawing” two cards in combination with any of the creatures in the deck. Being an instant adds some more flexibility as well. Removing Ponder might be the wrong cut as this won't help us keep 1-landers the same way Ponder does. 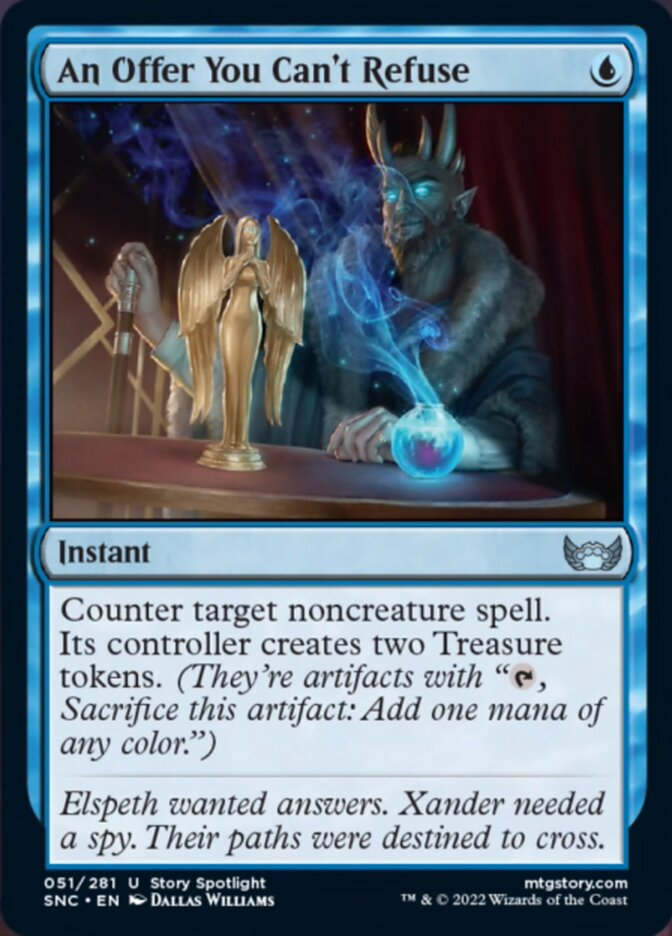 An Offer You Can't Refusemight be very good in this deck. The “inverted Spell Pierce” does not suffer from our High Tide boosting our opponent's available mana and unlike Flusterstorm we can use it to counter Planeswalkers, Enchantments and Artifacts.

There are many more or less durdly cards that the deck can run. I've tried many but not all of them. If you are looking for a budget option (by shaving Time Spiral) there are alternate routes with Accumulated Knowledge/Malevolent Hermit self mill shenanigans or Precognition Field with the Ghostly Flicker / Mystic Sanctuary INF combo, just to name a few. If you have the opposite issue and want to use all of your collection there's probably a Yorion, Sky Nomad version out there. Just mash the two sample lists together and add a playset of Snapcaster Mages and you are good to go (with 24 lands).

If you are an evil Chalice-person on detox you can still play your Karns in this deck by replacing the Cunning Wishes. It's surprising how similar cards you can add for a Karnboard (Hope of Girapuhr, Candelabra of Tawnos, Walking Ballista, Ratchet Bomb etc). Karn is also amazing with “An Offer you can't Refuse” as the treasures can't be sacced for mana.

Thanks for reading and happy Islands!

← The Dichotomy of DelverBattle of the Maxes →