The Dichotomy of Delver

It's been a long time since my last article, and while I've been away from writing, my passion for Magic hasn't waned.

Alas, I've become a mindless drone that wants nothing more in the world than to simply blind flip Humans into Insects and to draw a clutch Daze that my opponent can't play around.

I've had my stints with Delver quite a bit over the years, but I would never go as far as to say I was an "all Delver, all the time" sort of person.

Well, they printed Ancestral Recall, er, I mean Expressive Iteration and I quickly became obsessed with the card. I've now played a lot of the various ranges of Delver shells, but a few weeks ago, I read this interesting post by one Isaac Bullwinkle, @Bullwinkkle6705, known by his twitter handle on MTGO as well. He wrote this very interesting piece about the duality of Delver's "plans":

I wrote an article about Legacy Delver, its inherent problem of conflicting gameplans, and my attempt at fixing this problemhttps://t.co/if4L6AUznA

This piece really made me think about Delver from a holistic perspective. In the few weeks following this article, Delver decks actually look quite different (to my eyes, at least).

Let's look at a few examples of what Delver looks like now. First, examining what most would consider to be... 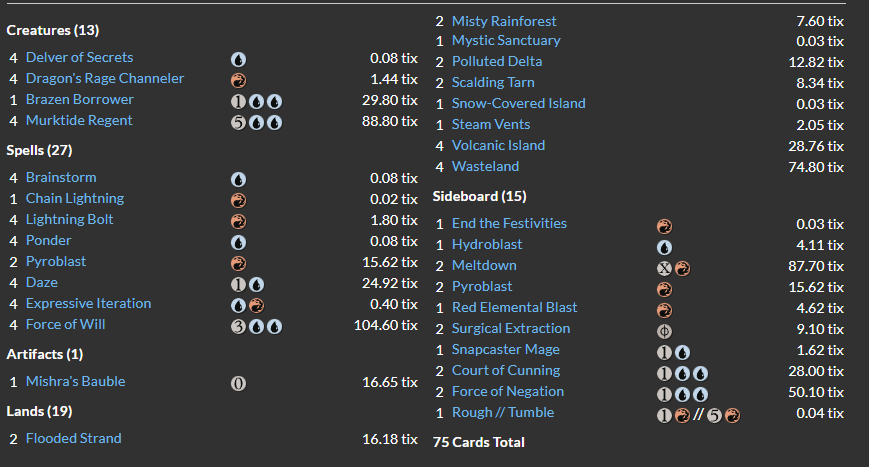 Pretty easy to understand. Comparing to other similar Delver decks, flex slots seem to be number of Mishra's Bauble, Chain Lightning, Brazen Borrower, and main deck copies of Pyroblast. I won't deep dive into this variant too much, dear reader, as you're already likely tired of this deck and its variations, so I'll quickly move onto a few lists that I find a lot more interesting. 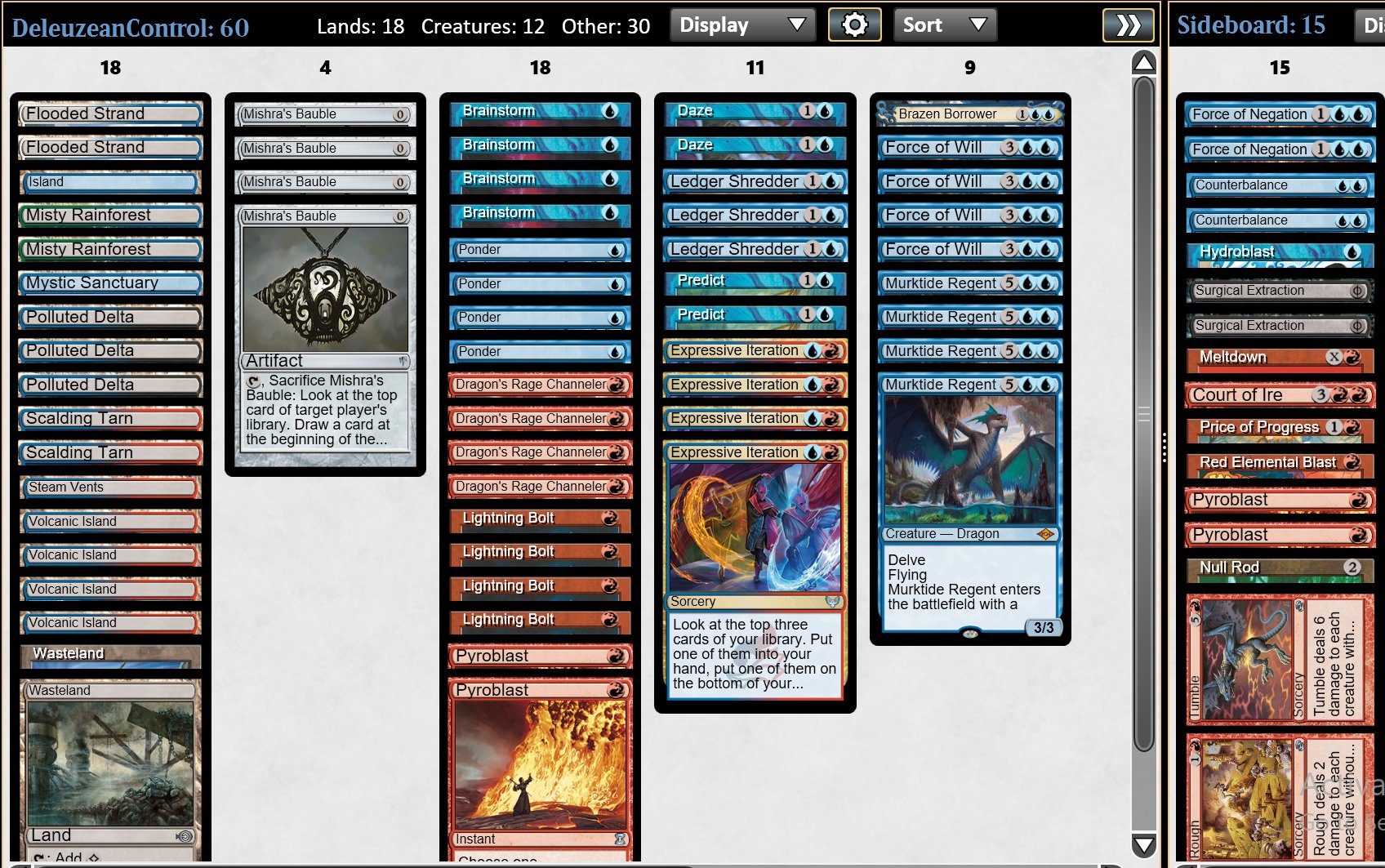 Coined "Deleuzean Control" by Isaac, this is Delverless Delver, the current iteration of Isaac's handiwork on solving the dichotomy-aspect of Delver. He forgoes the aspects of the Delver of Secrets package, trimming on Wasteland and Daze, as well as the eponymous Delver of Secrets. He leans all-in on the long-game power of Murktide Regent and Expressive Iteration, even including copies of my personal favorite card of all time, Predict!

It's pretty easy to see the aspects that really compelled me about this deck, but there are aspects of it that I don't fully understand. I also think that the deck in this form would likely not exist if a certain maddening card existed on Magic Online, but more on that later!

This list, pioneered by GP Niagara Falls winner Daniel Goetschel, is fairly different from the other two, mostly because of the difference in creature suites, leaning heavily in on Ledger Shredder and cutting Wasteland.
Daniel often dances to the beat of his own drum, but a lot of the ideas here are very interesting especially when you consider that it might have an edge in the mirror with the "meatier" creature spread and lack of Wastelands.

That's just the beginning of today's discussion, however. We're going to examine why these two variations of Delver even exist, why they are so different from stock Delver, and if Maddening Hex existed on MTGO, I hypothesize that all 3 versions of Delver we're looking at here would look very different.

Delver is the Best Deck

"That's quite a brash comment," you might be thinking, "what possibly makes you think that Maddening Hex would change so much about a stock and boring deck like Delver?" Well, dear reader, let's examine some common aspects of these decks and talk about the elephant in the room first!

Delver is the best deck in the format. That's a true, factual statement and you'd be hard pressed to give me any substantive argument against this, and the decks that we've examined in this article pay vast amounts of respect to this fact. The clear indication is the slew of main deck Pyroblast in all of the lists, with all of these lists sporting two main deck copies, and some variations even going up to six copies post board! It's easily the most important card in the matchup, as it fights every single axis that these Delver decks can present for a single mana.

What other considerations have these decks made to this fact? Let's examine the two deviations specifically:

Deleuzean's Adjustments to the Metagame

"Deleuzean Control" sports no copies of Delver of Secrets at all, being the single most fragile creature in the matchup, opting to firmly take a "control" role in the mirror match with more efficient noncreature spells and a more powerful late game engine taking advantage of the Daze, Mystic Sanctuary, Expressive Iteration and Predict engine much more so than regular Delver. This deck has no duality or modality to it, it firmly wants to murder you late into the game with its pile of cards to defend a Murktide Regent attack.

Things get more interesting when you examine the sideboard: Hydroblast, a total of 5 Pyroblast effects, and 2 Counterbalance lean heavily on less fragile, noncreature threats in the matchup. Counterbalance is a very divisive card, but with the combination of Predict, Mishra's Bauble, and Dragon's Rage Channeler, alongside the cantrip cartel, it can be manipulated to generate value fairly easily. The key thing here, however, is that Counterbalance has a tendency to contort sequencing and control the flow of a game, even if it never truly trades for a card. The threat of the card on its own is often enough to keep your opponent off-kilt enough to get across the finish line.

However, this approach does open itself up to some weaknesses. Mostly, you lose out on the "Delver draw" aspect of the UR Tempo shell, so you're likely going to be much less consistent at closing out games. Isaac attempts to shore up this weakness a bit with these sideboard choices, including a card I'd literally never read before seeing his decklist, Court of Ire. Court of Ire is a noncreature threat that cannot be hit by Pyroblast nor be hit by Prismatic Ending from the control decks of the format, and it kills fairly quick while also maintaining the core gameplan of this deck: outdrawing your opponent.

You also lose out on a bit of the "free win" equity vs some decks in the format due to being generally slower than traditional Delver, but the sideboard is packed full of combo hate for these moments as well, so that loss is not felt as well.

Bogdanoff Delver's Adjustments to the Metagame

Daniel takes the almost exact opposite approach. His decklist attempts to "get under" most of the format, including the mirror by virtue of his lower land count, and also including more creatures than the rest of these decks. He wants to whack you hard and fast, and his sideboard is indicative of that as well, being largely composed of cheap spells, going up to 6 Pyroblast effects post board.

However, he lacks some of the staying power that some other Delver decks have, such as Mystic Sanctuary (though he intends to correct that in future iterations of this deck), and without Wasteland he's much more open to specific lands based strategies, such Urza's Saga strategies (hence the triplicate Meltdown in this sideboard).

Now that we've thoroughly examined both of these Delver-ish decks, now it's time to talk about my thesis: If Maddening Hex was on Magic Online, (where these two players primarily play) neither of these lists would likely exist.

"That's quite a bold statement!" You'd be right, dear reader, in being skeptical of my statement, but this deep dive in Delver-based strategies actually was also a deep dive in assessing the format of Legacy today as a whole.

If you've been paying attention, you'd also notice that Jeskai Control is currently the next-best fair blue deck, compared to Delver, and both Daniel and Isaac's lists have adjustments within them to also handle the control and combo matchups, in addition to the mirror match. That's the metagame currently in both Paper events as well as MTGO. However, there's a missing angle of attack that Delver could have against all three metagame pillars: Maddening Hex

Quick shoutout to Luke Strasler, from whom I'd first even seen this card, in an errant comment he made on Twitter, asking if someone had tried this card in place of Sulfuric Vortex in their Delver deck. At first glance, it seems innocuous enough, but you want to know what each of the pillars of the format all do?

Cast a lot of spells in sequence. Maddening Hex on average is 3.5 damage per spell cast, and that alone is enough to often handle the issues that stock Delver has with the matchups that give it trouble. If this card was on Magic Online, I'd believe we'd see an arms race much more akin to variations of stock Delver battling against one another repeatedly.

This card on its own handles the dichotomy aspect that both Daniel and Isaac's list are trying to solve, in opposition from one another. It bridges the midgame>endgame that Isaac attempted to solve in "Deleuzean Control", while it also solves the early game>midgame problem that Daniel attempted to solve in "Bogdanoff Delver".

Now, what would a Delver deck look like with Maddening Hex in it? Dreadfully boring, I'm afraid:

Yep, it's just Delver with two Maddening Hex. But it's just such a powerful card that it existing alone flips several matchups that were previously problematic on their head.

I pitched Maddening Hex to Isaac when I saw him play Court of Ire but his response originally was something along the lines of being worried about not being able to pressure Jeskai Control enough in his deck (a worry that I believe to be valid). However, I thought to myself that if this card existed and you built Delver to take advantage of it in certain matchup profiles, would you even need to build to solve "the dichotomy problem?" Maybe you still do, I'm not sure.

Magic Online is where I primarily do most of my testing, but I've tried this card out in paper and it's completely changed my strategies in several matchups and I really wish I could test with it much more than paper play could afford me.

Did I really just spend over 2000 words saying Maddening Hex might see play in Delver? Yes, I did, but I think it's important to fully understand the impact a card like this would have on the format, and I think it'd be iterated on an "solved" that this card would change a lot of matchup profiles on its own. At the end of the day, however, yes Delver would still be the best deck and that fact wouldn't change. If anything, it'd be more exacerbated than before.

Was this all a waste of time? Maybe! I found it enjoyable to put my thoughts into writing for the first time in a while, and I hope maybe at least one of you, dearest readers, could appreciate the same. Until next time, take care!