The (Steely) Boys are Back in Town

A little over a year ago, I decided to try playing the best deck in Vintage. Named after its namesake card, Mishra's Workshop, Shops is an absolute monster of a deck. I've been a proud Blue player since 2012, and regardless of what kind of deck I was playing, it was almost certain to have Islands in it. I stumbled on Shops kind of by accident, as I was looking to pick up a few Mox Opals on Magic Online in order to play the most Blue of Vintage Blue decks, Paradoxical Outcome. Mox Opals were 60 tickets each, and I realized, for that price, I could just buy the entirety of Ravager Shops. So I did, and I encountered some of the most success I've ever had playing a Magic deck. You can read the story here, but the gist of it is that in my first 100 matches with the deck, I won 81 times, loving every minute of it. I certainly felt an…affinity…to those little artifact creatures.

Knowing how much I both enjoyed playing the Shops creatures, and how much I enjoyed Legacy, I decided to mash them together.

Fair warning to Vintage players: you will really miss Mishra's Workshop, and will feel its absence. The mana in this deck is significantly worse than its Vintage counterpart. That said, enjoy having unrestricted Chalices of the Void, Thorns of Amethyst, and Lodestone Golems!

To find a starting list, I looked at the decks from Pro Tour 25th Anniversary, where Legacy Steel Stompy was represented by four players. I started with Scott Lipp's list, posted below. 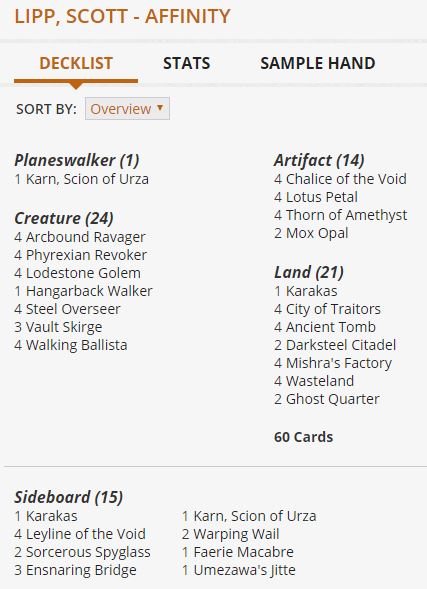 While all four Steel Stompy decks from the Pro Tour look wildly different, as do the lists of the few other Steel Stompy pilots on Magic Online, the core of the deck consistently looks like this:

The rest of the deck is extremely open to customization.

Reasonable spells include higher numbers of the “core” creatures, Karn, Scion of Urza, Etched Champion, Phyrexian Metamorph, Thought-Knot Seer, Sword of Fire and Ice, Umezawa's Jitte, and maybe even other cards that no one has considered yet.

The “core” land base is only 16 lands, and most Steel Stompy lists run 21-23 lands. You can fill up the remaining land count with your choice of Karakas, Inventors' Fair, Ghost Quarter, basic lands (Swamp is best), Darksteel Citadel, Urborg, Tomb of Yawgmoth, or even fun cards like Phyrexian Tower or Tower of the Magistrate. Generally speaking, you want at most 2 copies of any one of these lands, especially the Legendary ones.

The sideboard generally contains 4 Leyline of the Void, 2-3 Ensnaring Bridge, additional copies of Karn, Scion of Urza, a couple of Warping Wail, and then dealer's choice of Umezawa's Jitte, Sword of Fire and Ice, Ratchet Bomb, Sorcerous Spyglass, Spellskite, Faerie Macabre, or Dismember. Some other Steel Stompy pilots have experimented with splashing harder on a colored source of mana, which opens up sideboard cards like Diabolic Edict in Black, or Choke in Green.

This deck offers a lot of room tinkering. Most of the card options feel like lateral moves, where cards can help sure up some matchups at the cost of giving ground in others. Over the past 6 months, I've played about 200 matches with Steel Stompy, and I've almost never submitted the same 75 cards twice in a row. The most significant leap in the development of my Steel Stompy list was the realization that the majority of my losses came from the following two interactions: Delver vs. Ancient Tomb and Lodestone Golem vs. Lightning Bolt or True-Name Nemesis.

While Ancient Tomb is the best land in the deck due to its ability to cast Chalice of the Void on Turn 1, the 2 Life cost of activating it adds up, especially when the damage is compounded by an Insectile Aberration clocking in at you. Taking 5 damage per turn is not sustainable for very long. While the deck needs its full count of Ancient Tombs, it must also be constructed in a manner to remove Delver of Secrets quickly.

While the opportunity to play 4 of the Vintage-restricted Lodestone Golem is one of the factors that drew me to Legacy Steel Stompy in the first place, it was matching up poorly against some of the most commonly-played cards in the format. This led me to cut Lodestone Golem entirely. On my first go-round, I replaced it with 2 Etched Champion and 2 Phyrexian Metamorph. The Metamorphs were frequently great, serving as my own True-Name Nemesis, Endbringer, Marit Lage, or just another Thorn of Amethyst. The Etched Champions underperformed, as opponents could frequently just take me off Metalcraft to kill it. I decided to try playing the best card from Steel Stompy's colorless counterpart: Thought-Knot Seer. In addition to surviving Lightning Bolt, Thought-Knot Seer just as good as Lodestone Golem against combo decks, and also lets you snipe True-Name Nemesis, Back to Basics, or dangerous equipment out of a Stoneblade opponent's hand.

If Lodestone Golem is poorly positioned, and Thought-Knot Seer isn't, why not just play Eldrazi? While at least part of the answer is that Steel Stompy is just a lot more fun to play, I think that the artifact creatures enable winning through a lot of conditions that Eldrazi can't beat, such as a 6-toughness blocker, an early Blood Moon, or an Ensnaring Bridge. In Eldrazi Aggro, once you present a few 3/2s, 4/4s, and 5/5s, that's all you've got. If your opponent has good blocks, there's really not much you can do about that. In Steel Stompy, however, Arcbound Ravager allows you to attack with a set a creatures, and depending on how your opponent blocks, sacrifice things and throw counters around to be maximally beneficial to you. In addition to presenting lethal damage out of nowhere, a more modest use of Arcbound Ravager is just to make the deck more resilient against removal. It's not just Arcbound Ravager that's great; Steel Overseer and Walking Ballista can break almost any board stall given a couple of turns. Where Eldrazi Aggro would get stuck, Steel Stompy can continue to grow its board presence well past the ceiling of Eldrazi.

After bombing out (2-4 drop) of the Legacy Format Playoffs with a Lodestone Golem list, I tried my Thought-Knot Seer list in the April 6th Magic Online MCQ. I went 7-2 in the event, finishing in 9th place. While it would have been nice to have slightly better tiebreakers, I ended the day very happy with both the deck and my performance. In matches, I went 1-1 against both UW Stoneblade and URx Delver, and beat everything else.

Going into the Grand Prix in Niagara Falls this weekend, I'm planning to register something very close to this list:

While the specific 75 card list fluctuates too much to create a clean sideboard guide, I will provide some general tips:

I also recorded 4 matches of a League with 73 cards of this 75. There are some cool matches in here; hopefully they help provide additional insight into the deck's strengths and weaknesses. Enjoy!

One more thing: If you see me at the Grand Prix this weekend and want to say hi (and I'm not in a match), please do! It might be cheesy, but the best part of Magic is the "gathering.”