This article is a two-fer! First I'm going to talk about Grand Prix Niagara Falls, and then get into some meaty goodness featuring the new War of the Spark card, Karn, the Great Creator.

A couple of weeks ago, I flew to Niagara Falls to play in my third Grand Prix. I don't get to play big Magic tournaments that often, so I really wanted to make it count. In previous articles, I went over my development of Steel Stompy, trying to push what I believed was secretly a Tier 1 deck, and with a little bit of luck, maybe take home a trophy.

A couple of days before the tournament, a few very good players independently gave me the advice to cut the basics out of my deck, since I wasn't beating Back to Basics anyway. I replaced them with 2 more Blinkmoth Nexus, and registered this list:

I want to graciously thank Jacob Kory for lending me the vast majority of this deck. Jarvis Yu was also super helpful and generous in bringing me copies of hard-to-find cards with almost no notice.

Since the two people lending me cards enjoy Korean and Chinese cards, respectively, there were many times that judges were called to get Oracle text, especially concerning Tower of the Magistrate. At one point, deep into Day 2, a judge actually asked me, "What's the name of that card?"

Tower of the Magistrate was suggested by Reddit user PVDH_magic, as a way to give a Germ token protection from artifacts, effectively nullifying a Batterskull . While I never got to live that particular dream, a topdecked Tower of the Magistrate did end up giving my Blinkmoth Nexus protection from Baleful Strix in order to deal the final point of damage to a Grixis Control player who had otherwise taken control of the game.

Here's give a quick rundown of my matchups and results:

I got lucky in some points throughout the event, and unlucky in others. I definitely got lucky to get two byes, by which I mean a couple very unfortunate ANT players attempting to combo through an endless sea of permament-based hate. I also got lucky to dodge my worst matchup, and the most played deck in the room - UW Stoneblade. I got a little unlucky by running into UR Delver players splashing Green for multiple copies of Ancient Grudge, a Null Rod or two, and mulliganing to oblivion a few times over the tournament. Of 15 die rolls, I only won 6, which is not where a Chalice deck wants to be.

In summary, Steel Stompy ran exactly as expected. 11-4 is right at my overall win rate with the deck, which is the highest I've achieved with any deck in Legacy, but you can't win a tournament just by performing at par.

Speaking of winning the tournament - Daniel Goetschel, gul_dukat on MTGO, is an absolute master. He has been low-key one of the best players on MTGO for a while now, which is even more impressive when you consider he's only 18 years old. If you ever watch him stream, which I recommend you do, his stream of consciousness narration is something unto itself. People joke about his "galaxy brain" and 200 IQ, but that's not accurate. His IQ is way, way higher than that. 2000 IQ.

The best part of going to Grand Prix Niagara Falls was not the tournament, but the people. I got to hang out with people I talk to daily in various online Legacy communities, but either hadn't seen in a couple of years or had never met before. Seeing all of them was fantastic. Y'all are great. The falls themselves were really cool, as well, especially when lit up at night. 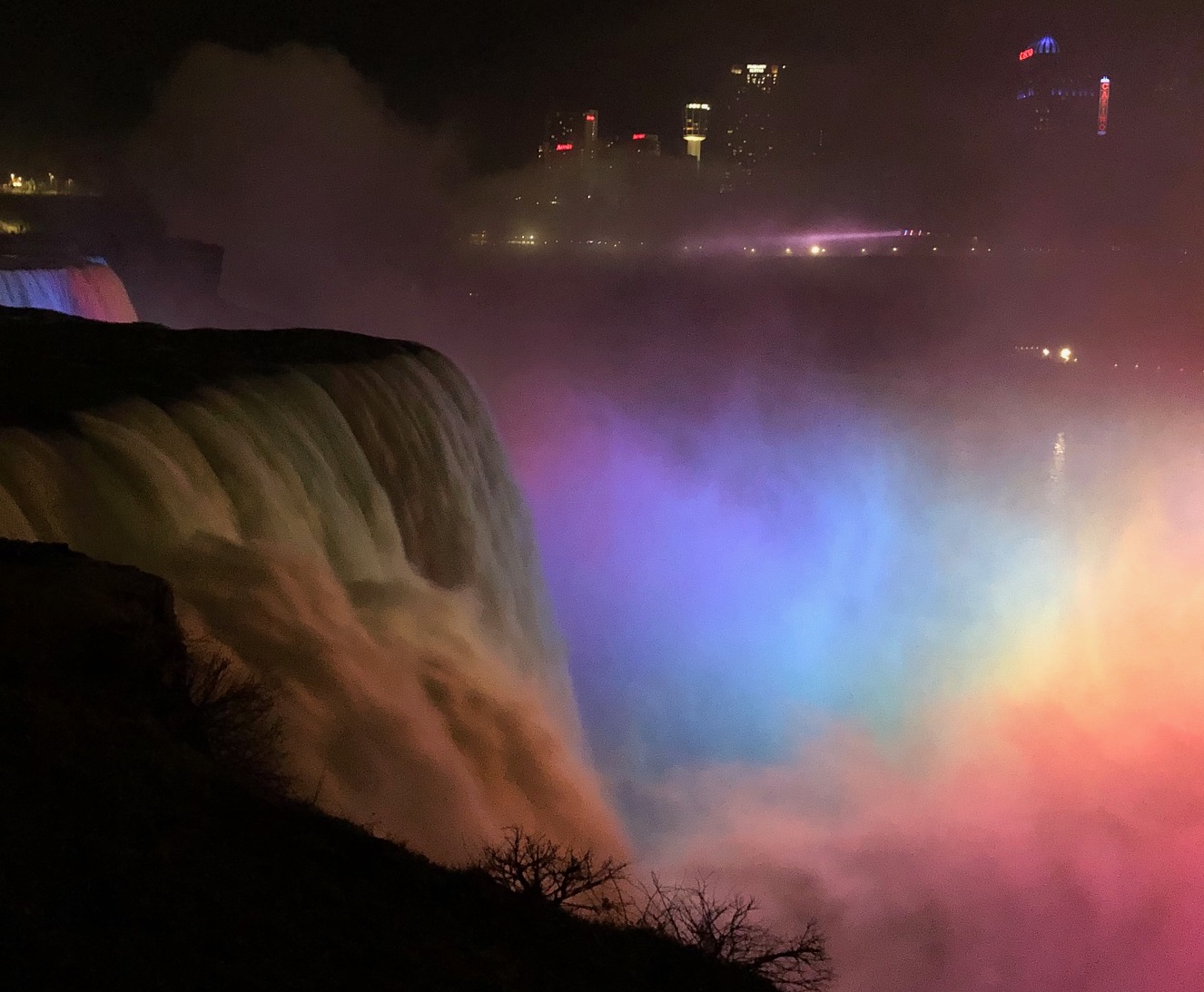 This Grand Prix also marked the end of a particular era in Legacy. I'm fairly convinced that Wizards of the Coast is going to implement the London Mulligan. I wrote an article on this blog , disparaging the rule, and I now believe I was wrong.

One of the biggest factors I didn't consider is that card quantity still matters. You can mulligan aggressively to a card or set of cards, but if you have nothing else, you will fold easily to an answer.

In addition, I didn't take into account the skill-testing aspect of the London Mulligan. While we accept that Brainstorming correctly is one of the toughest things to master in Legacy, it didn't occur to me that asking players to choose which card(s) to tuck away is another great way to help amplify skill over luck in Magic.

While this is more emotional than scientific, having played with the London Mulligan on Magic Online, I'm dreading its departure. I like not feeling incredibly punished for mulliganing a bad 7 that technically plays Magic, only to have my 6 card hand be no lands and 5 card hand be all lands. As I mentioned previously, I mulliganed to oblivion a few times at the Grand Prix, and each time, I was really wishing that the London Mulligan were in effect.

London Mulligan or not, though, the newest set, War of the Spark, already seems like it's going to shift Legacy as much as Innistrad did.

Of all of these, the card that I believe will be most impactful is Karn, the Great Creator. 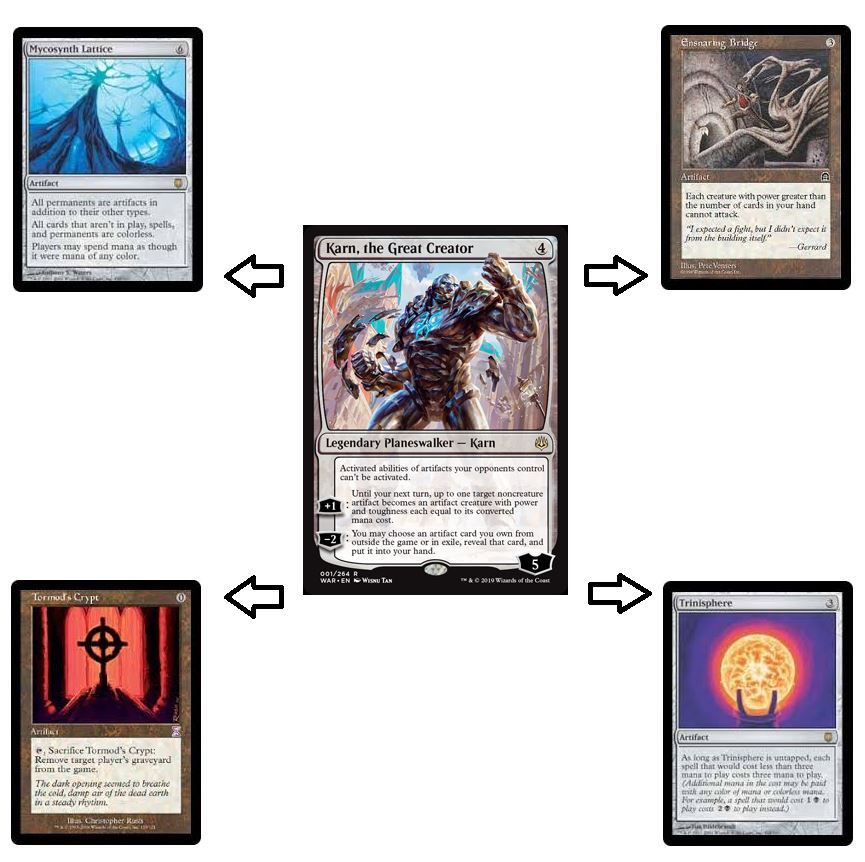 Do you know how insane it is to give a Chalice deck a Demonic Tutor with a static ability that's a one-sided Null Rod, and provides immediate access to whatever card in your "Wishboard" that just wins the game on the spot?

Having played several leagues with the new Karn, the Great Creator, I can confirm: it's insane.

Just so we're all on the same page with Mycosynth Lattice, the combo is as follows:

Karn, the Great Creator enters the battlefield at a convenient 5 loyalty. A common play is to -2 to grab an Ensnaring Bridge, play it to keep Karn safe, then next turn -2 again to grab Mycosynth Lattice, locking your opponent out of the game.

After thinking about this new Karn a little more, I realized it might break Bomberman.

Bomberman is a "fringe" Legacy/Vintage archetype that involves using Auriok Salvagers to generate infinite mana with Lion's Eye Diamond, or in Vintage, Black Lotus. It used to have to win by using that infinite mana to then recur a Pyrite Spellbomb to win the game in 2 damage increments, earning it the name "Bomberman," but Kaladesh provided a cleaner kill in just making a giant Walking Ballista.

In Legacy, Bomberman is a Chalice deck, playing 4 Chalices of the Void, along with the mana acceleration to run it out on Turn 1, being 4 Ancient Tomb, 4 City of Traitors, 4 Lotus Petal, and 4 Mox Opal. It also plays 0-cost Urza's Bauble and Mishra's Bauble to allow you to cycle through your deck, as well as to "half-combo" by drawing an arbitrarily large amount of cards on your opponent's upkeep. To complement the 20 0-cost noncreature artifacts, it also plays a full set of Monastery Mentor. Due to the large amount of artifacts in the deck, as well as wanting to dig for particular cards, Karn, Scion of Urza was a natural inclusion for the deck.

Due to the deck's reliance on 0-cost artifacts, Bomberman became known as a Chalice deck that loses to other Chalice decks, since an opposing Chalice player can cast a Chalice of the Void on 0 as soon as they realize what you're playing, turning off your combo and preventing you from cantripping with your baubles.

Here's where Karn, the Great Creator comes in. This card singlehandedly flips the Chalice matchup.

Going beyond the Chalice mirror, Karn, the Great Creator does even more for Bomberman. By putting one of your Lion's Eye Diamond and one Walking Ballista in your sideboard, you now have a functional 6 copies of each, which makes it a lot easier to find a copy of each for the combo.

Also of note, Karn, Scion of Urza's plus ability exiles cards, and Karn, the Great Creator can also tutor for artiacts in exile. This is just a bonus synergy that increases the options available to you. Sometimes, you just need to grab an Ancient Den with a Silver Counter on it!

When you put this all together, the deck kind of builds itself. Noted Bomberman player Eric Berlett and I independently arrived at an identical maindeck 60, and very close on the overall 75. Without further ado, here it is!

I was going to record a video for you to watch this deck in action, but Jarvis Yu CRUSHED with the deck on his stream on Monday, so I'm embedding that instead. He also might have accidentally opened over 300 chests during the stream, so watch out for that!

Jarvis streams Mondays and Thursdays, starting at around 3pm Pacific/6pm Eastern, and going for hours. If you haven't watched his content, you should (and follow/subscribe). Jarvis is great. Jarvis Yu on Twitch Jarvis Yu on YouTube

Moving forward, I'm convinced the maindeck is perfect, but there is potential for the sideboard to be improved. The first thing I would try is replacing one Swords to Plowshares with a Wurmcoil Engine. It's a powerful, tutorable creature that can win a subset of games in windows that neither Ensnaring Bridge nor Mycosynth Lattice would, at that time. You can always find the "lock" on the next turn.

By the way, the new Ugin, Ugin, the Ineffable is also bonkers. I have a feeling that a very good Cloudpost list exists that takes advantage of these insanely powerful colorless Planeswalkers. Here's my starting point:

I hope you enjoyed reading about my experience at Niagara Falls, and are as excited as I am to brew with this new set! Thanks for reading.