SPOILER ALERT! This “What's the Play” is from Max's Vintage Esper Phoenix League, Match 3. If you don't wish to be spoiled, don't read on. If you've already watched it, don't care, or just really like spoilers, then keep reading! I'm not going to stop you; I'm just an article. 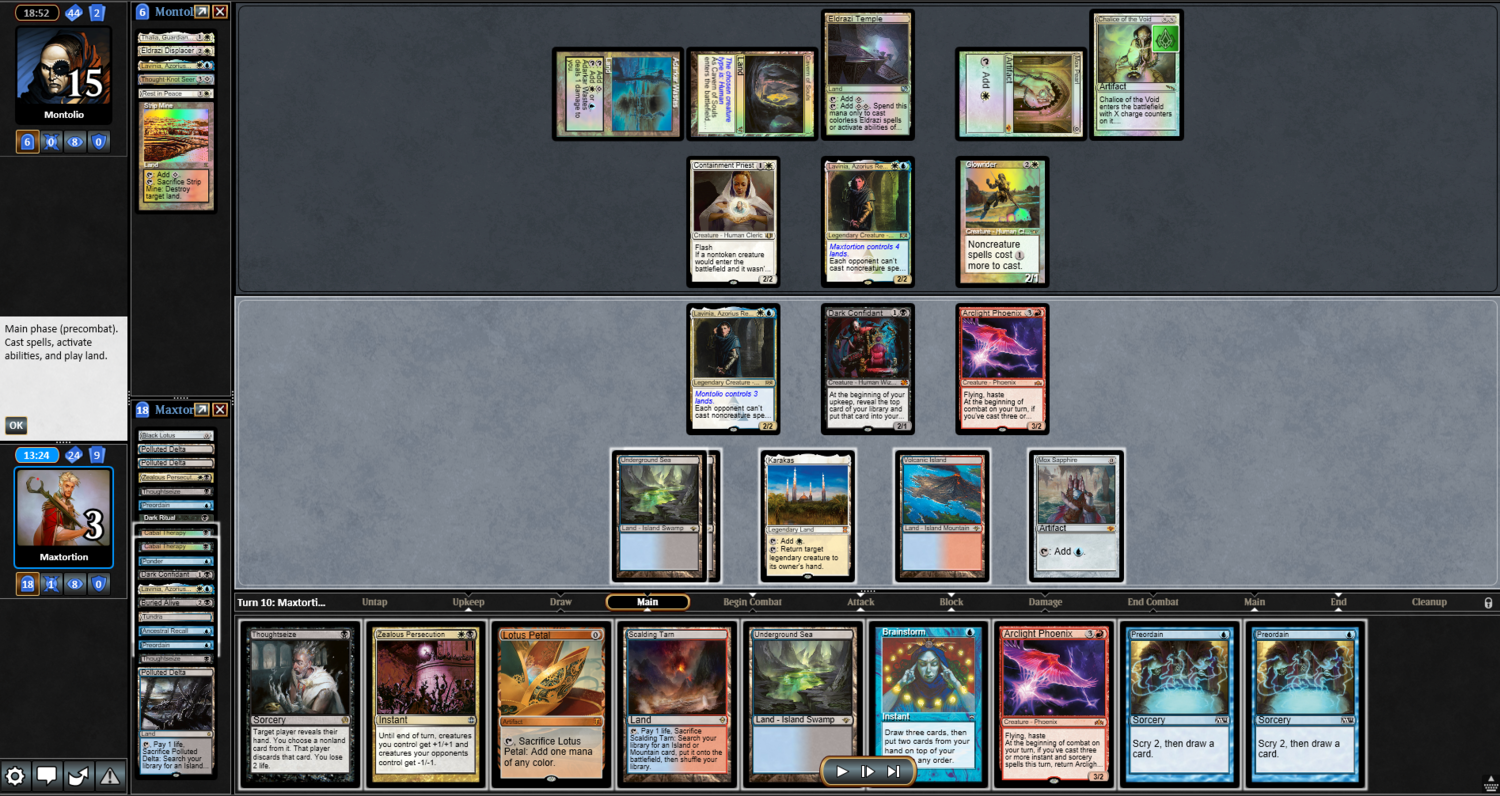 This is game 3. Lots of turns have elapsed, and Montolio just resolved a Chalice of the Void for 1 last turn. We were going to upkeep Brainstorm to stack Zeroes on top of our library for Dark Confidant (hereafter known as “Bob”), but the Chalice put a stop to that. We just revealed a Preordain, and drew a second Preordain, going from 4 life to 3.

Montolio knows about our Zealous Persecution, as we revealed it to Bob.

Our deck has 2 more Arclight Phoenixes, 2 more Buried Alive, and 20 other cards that do nothing other than cost 1 or 0.

What's our best play here, to maximize our chance at winning this game?

Once you've thought about it and decided on your line, read on. We're going to derive the best play and the reasoning behind it.

We know the following things:

We can't take 4 damage on Montolio's next turn, or we die.

If we take 2 damage, a bunch of cards in our deck kill us if they get flipped to Bob.

Cabal Therapy in our graveyard can “sacrifice” Bob for the cost of 1 mana, even though it doesn't resolve.

Montolio can draw one of 4 Reality Smashers to win instantly, or one of 3 remaining Thought-Knot Seer to be annoying, and most likely also win. He probably also has 2 Karakas to draw. We should try to minimize his draw steps.

We can deduce the following:

It makes no sense to play around a drawn Reality Smasher, as we can't beat it.

Thought-Knot Seer would take the Zealous Persecution, so we should be aware of that.

A drawn Karakas could bounce our Lavinia, Azorius Renegade, making her a less reliable blocker.

First, it is pretty straightforward that our best way of winning is in the air, attacking with Phoenixes. But how many, and when?

First, let's tap the 4 lands (other than Karakas) in play to cast the second Arclight Phoenix, and play an Underground Sea from hand.

To figure out our attackers, we first need to figure out what blocking will look like against Montolio. If he doesn't draw a Karakas, our Lavinia trades with his Containment Priest, Karakas bounces his Lavinia, and we can afford to take 2, provided we sacrifice Bob to the Cabal Therapy.

Montolio has a roughly 4.8% chance to draw Karakas as his card for turn, which kills us on the spot unless we leave back Bob or Phoenix as back-up blockers. Since Bob has a 16.6% chance of killing us next turn, risking a 16.6% chance to hedge for a 4.8% chance doesn't make sense. If he's not blocking, he should probably be attacking on our turn. Whether we sacrifice him remains to be seen.

If we leave one Phoenix back to block, we would be getting in for 5, with one Phoenix and the Bob. Note: We are assuming he wouldn't block to trade with Bob because it simultaneously eliminates his chance to win with Bob flipping lethal, and removes an attacker, making his potential attack much weaker. This means Montolio is at 10.

Let's say Montolio doesn't draw a Thought-Knot Seer or Reality Smasher, but instead draws a middling non-Legend creature, like another Containment Priest or Eldrazi Displacer. We already know he has a Thalia, Heretic Cathar to play, at the bare minimum.

After casting Zealous Persecution and Karakas-ing his Lavinia, we would have: 2x 4/3 Flying, a 3/2, and a 3/3, against a 2/2 (say it was a Shrunk Displacer) and a 1/1 Containment Priest. We hit for 8, blocks and trades occur, and Montolio gets another shot at drawing Reality Smasher. For this line, we also have to not die to Bob.

Not bad, but what if we attack with both Phoenixes?

If we do that, a topdecked Karakas kills us, as well, since it removes our lone blocker.

However, does a topdecked Thought-Knot Seer still do us in? Montolio would be at 7. Thought-Knot Seer would take Zealous Persecution. Let's say he leaves everything back to block, meaning nothing gets through on the ground, and we have a lethal shot from Montolio on the attack back. So, a drawn TKS is still a loss for us.

The odds of this line working are the product of our 83.4% chance to survive Bob combined with the 79.5% chance to fade 2 Karakas, 3 Thought-Knot Seer, and 4 Reality Smasher off the top for Montolio. The odds of us winning are still a little better than before, though! Our odds to win are now a respectable 66.3%

But wait! Dark Confidant isn't doing anything else productive, once he attacks and connects. He's not blocking, and all he has to do it not kill us on our upkeep. This means that we can sacrifice him with Cabal Therapy after he gets in for his 2 damage.

Once we take that into account, our odds to win are simply the odds of fading one of 2 Karakas, 3 Thought-Knot Seers, and 4 Reality Smashers off of Montolio's deck, which is 9 cards in 44, or 79.5% to not see one of those 9. Therefore, sacrificing Bob to Cabal Therapy brings our odds of winning to a whopping 79.5%!

Therefore, our best play is the following. Play Phoenix (leaving Karakas up). Attack for 8 with both Phoenix and Dark Confidant. In the second main phase, play Underground Sea for turn to pay the Glowrider tax, and sacrifice Dark Confidant to Cabal Therapy. Provided that the MODO gods are smiling, you have an almost 80% chance to win!

In the actual match, I completely missed the play of attacking with Bob, holding him back to block in case of a top-decked Karakas. As we now know, that was bad equity. Montolio drew a blank, passed back to me after playing Thalia, Heretic Cathar, and Bob flipped an Arclight Phoenix in my upkeep. Oops. The correct play in Magic is often a tough nut to crack, and you don't have time to calculate the odds of everything in-game, like we just did here. Hopefully, though, by going through all of this now, next time a similar situation arises in my game or yours, we will have a better gut-feel about what our best play would be.